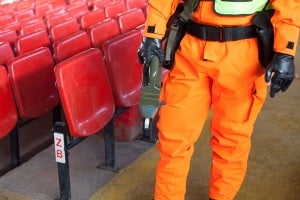 Argon Electronics’ range of CBRN response training simulators has brought a degree of realism that has significantly enhanced training at an exercise staged for police in the south-west of the UK. The Argon equipment was supplied by the Police National CBRN Centre at Ryton-on-Dunsmore in Warwickshire, which oversees the Police’s capacity and capability to deal with CBRN incidents, and was a highly valuable tool in the exercise as a means of improving the quality and value of training.

The Avon and Somerset police used the simulators for a training exercise held at the Bristol City football ground. The premise of the exercise was that the police were present to provide security and safety at a half marathon charity event in support of military charities, starting and finishing at Bristol City Football Club. The inventory comprised a variety of CBRN training simulators, including Argon’s PlumeSIM™ system, which enables a single instructor to configure simulated chemical and radiological releases across a wide area, and then to monitor and manage multiple trainees in real time from a central location.

For the purpose of the exercise, advance intelligence had suggested that some chemical weapons had been smuggled out from Syria for possible terrorist use in the UK. Police were also informed of a known active Syrian community in Bristol with both pro and anti-government factions represented and told that tensions in the area had been apparent for some weeks.

Carrying out the exercise

On the day itself, organisers arrived early to plan the full day in detail, which played a key role in the success of the training. Had the trainees arrived and been forced to wait while organisers spent the first two hours planning they would have lost focus. The emergency services may face many occasions in real life where planning isn’t possible, but there are often many incidents where advance intelligence tells the Police to expect an incident. The premise of the pre-planned exercise carried out at Bristol City Football Ground was that the Police force had received advance intelligence that something was possibly going to happen and on this occasion the organiser’s pre-planning supported the event and the premise.

Realism was introduced at every opportunity. The release of agents took place while the commanders were still delivering their briefings, at which point two smoke machines went off and a hundred people started screaming. The training was not only physical, where trainees gain familiarity with the equipment, but also emotional. The purpose of this was to enable trainees to cope effectively with a frightening scene to be prepared for a real life situation. To the trainees listening to the briefing who may have been relaxed and waiting for the training to begin shortly, the sudden sound of a hundred people screaming and the sight of smoke billowing out of the stadium immediately put them into an alert and focused frame of mind. This ensured that everyone – the police included – reacted to the circumstances as if it was a real life emergency. This realism was supported by the use of the Argon equipment, which enabled the trainees to start trying to locate the source immediately as if in a real life situation.

The quality of this training exercise was enhanced by electronic simulators, which support emergency services with preparations for situations similar to real life. For training organisers the alternatives to electronic simulators are live simulants, such as deep heat, but exercises can become unrealistic as training personnel have to be so close to these to get a detector reading. With Argon equipment the police were able to simulate a faraway plume, which is similar to how it would be in a real incident. Another alternative is to simulate particular forms of contamination with special liquids, however simulated substances don’t lend themselves to repeated training, as they cause lasting contamination. A key advantage of electronic detector simulators is that they look, feel and function exactly like the real detectors but respond to safe electronic sources. With electronic simulation equipment the trainees can realistically carry out their roles without risk of harm or damage to themselves, other participants, their equipment or the environment.

Trainees learn more effectively from practical training, which is why electronic simulators are so important in successful CBRN training as they offer the opportunity to put learned knowledge into practice.