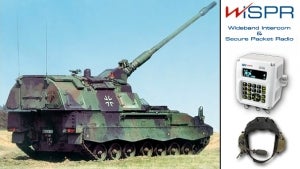 IDE (INTRACOM Defense Electronics) signed a €4.1m contract with Krauss Maffei Wegmann (KMW) for WiSPR intercommunication systems, in the frame of the PzH2000 retrofit programme of the German Army.

This follows the successful completion of the prototype PzH2000 retrofit programme, which was concluded in 2013, and where WiSPR once more proved its superior communications capabilities under significantly noise-burdened environments. WiSPR system deliveries for this programme will be completed within May 2017.

WiSPR is a state-of-the-art, digital intercommunication system with leading performance in vehicular noise reduction and de-centralised system architecture, capable of adapting to different operational requirements. The system is designed and produced by IDE and it is characterised by reliability, ergonomy, and reduced logistics footprint.

IDE’s CEO, Dr. George Troullinos, stated: "We are very pleased by the continued international recognition of our products from quality driven users, which motivates us to further invest in leading-edge technologies."