At present, EWR’s weather radar systems are in the hands of a broad spectrum of end-users. They vary from domestic and foreign governments as well as US and international corporations, service providers such as broadcasters and community emergency readiness agencies, local and national weather services, and small to mid-sized airports.

One of the most distinctive components of an EWR weather radar system is not found on the system, but in the optional service contract which is available with every system. Unlike its competition, EWR’s service contract provides 24/7 support service 365 days a year. Should a problem arise, the company’s response time is within hours, not days, of a call. When necessary, EWR has the capability of sending a repair team anywhere in the world to resolve a situation.

Another hallmark of EWR weather radar systems is its ongoing vigilance in seeking out new technologies for its equipment. EWR maintains close affiliations with a broad spectrum of government and educational entities, including taking part as an industry partner of the collaborative adaptive sensing of the atmosphere (CASA).

Where previous doppler radars utilized tube transmitters (klystrons, magnetrons, TWTs, etc.) that require frequent tuning and are prone to failure in harsh environments such as those found in mobile tactical applications, the E700XD uses a solid-state transmitter which is virtually maintenance-free and consumes far less power.

The benefit is that the E700XD can provide equivalent or better sensitivity and range resolution compared to a 10Kw – 12kW radar while transmitting a fraction of that power.

The E700DP is a dual polarized version of the E700XD doppler weather radar. The DP incorporates the same advanced solid state technology and features found in the E700XD. The E700DP comes standard with a 30in antenna for maximum portability. Optionally available is a 48in antenna for trailer, vehicle or fixed mount radar installations.

The E700DP is the ideal choice for hydrology studies or as a gap filling radar. 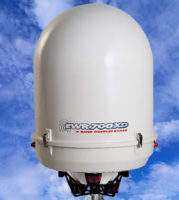 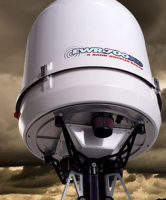