Mine Detection and Removal Attachments for Military Vehicles

Fascan International, the exclusive US distributor of Fassi Cranes, designs mine detection and removal attachments for military vehicles. Its main products include large and medium rakes, rotating grasping rakes, supersonic air and water nozzles, and more. 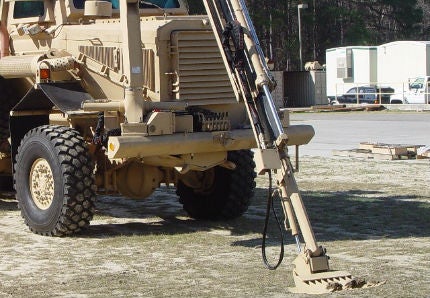 Fascan International, the exclusive US distributor of Fassi Cranes, designs mine detection and removal attachments for military vehicles. Its main products include large and medium rakes, rotating grasping rakes, supersonic air and water nozzles, and more.

The Interrogation Arm is a vehicle-mounted Fassi crane arm with a boom, R-vision daytime cameras, and a digging / raking implement for uncovering, investigating and removing suspected improvised explosive devices (IEDs). The unit provides standoff interrogation of suspected IEDs, which provides a significant improvement in vehicle and personnel survivability from a possible IED detonation.

The Interrogation Arm can be installed with basic hand tools on any vehicle in less than one working day. Speed, simplicity and versatility are critical components of any equipment in a militarized area. The faster a piece of equipment can be deployed in the field and the quicker it can be brought up to full operation, the more useful and functional it will be.

With extensions, the Interrogation Arm can reach up to 32ft to allow a safe distance between the operator and the area being excavated.

Rake attachments for mine and IED detection and removal

The Interrogation Arm’s proprietary rake attachments enable it to safely dig up and remove mines, IEDs and other explosive anti-personnel devices. These rakes come in a variety of models:

The large rake has a digging volume of 35l and a width of 16.5in. This rake is best used for removal of sandy, less compacted soil.

The medium rake has a digging volume of 28l and a width of 11in. This rake is best used in compacted soil for maximum interrogation depth.

The rotating, grasping rake provides 22in grasp and 360-degree rotation. Rotating the rake to different angles allows the user to expose potentially dangerous objects. This rake features a grasping force of 3,000lb and has a lifting capacity of 700lb.

Digging tools for mine and IED removal

Fascan also offers special digging tools in addition to its rakes, including:

The Interrogation Arm’s Auto-Stow feature enables an operator to return the crane to its stowed position – regardless of the crane’s orientation – via a simple series of keystrokes on the remote control.

Advanced mine and IED detection and removal attachments

The Interrogator Arm’s interface system gives almost any vehicle the ability to find and remove explosive devices. The arm and attachment are all operated via a simple, easy-to-deploy radio remote control and are augmented by several attachments that allow for enhanced visibility and monitoring.

Its camera-equipped crane extension enables its users to safely seek out and identify mines, IEDs and other explosive anti-personnel devices in locations not viewable to the naked eye.

In addition, the arm features an instrument display. CAN-BUS sensors relay important feedback to the operator, including articulation angle, extended distance, lifting pressure and weight at the boom tip.

Recognition of excellence and expertise

Fascan applies its combined expertise in mechanical, electrical and hydraulic technologies to the development and adaptation of its range of attachments. It can adapt its arms and attachments to almost any vehicle.

Special design requests for the Interrogation Arm can be fast tracked to the degree that design to delivery is measured in days, not months.

The use and function of the Interrogation Arms for military vehicles was validated when Fascan’s technology was recognized by the US Army as one of the Top Ten Inventions for 2007. The equipment has identified and removed IEDs in combat zones around the world for the last ten years.

Digital videos of the various interrogation arms in action, their uses and their upgrades can be viewed by contacting Fascan International.