i-bodi Technology specialises in the development of test platforms for the testing of respirators and protective clothing. We are an innovative company experienced in project research, development and manufacturing. 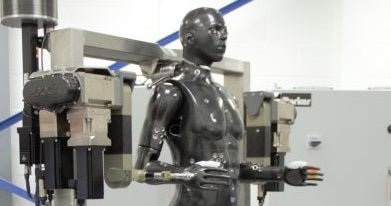 i-bodi Technology specialises in the development of test platforms for the testing of respirators and protective clothing. We are an innovative company experienced in project research, development and manufacturing. We create bespoke products from customer defined specifications and are experienced in developing computer-controlled test platforms for use in chemical, biological, radiological and nuclear (CBRN) environments.

The Porton Man was designed for the testing of chemical and biological (CB) protective suits and equipment. The Porton Man is a computer-controlled mannequin that when attached to its drive frame, can be made to walk, march, run, sit, kneel, climb stairs and lift its arms as if to sight a weapon just like an infantry soldier. It is manufactured to exact anthropometric data and has over a hundred sensors to record data, enabling scientists to carry out real-time analysis.

This Sweating Mannequin System was designed for the testing of chemical and biological (CB) protective suits and equipment. It has the same range of movements as the Porton Man but in addition the torso can also twist as the arms move back and forth during the running and walking actions and it has a heated surface that enables it to sweat.

The Porton Man is a computer controlled, mannequin for the testing of protective clothing that can perform a series of movements that mimics those of an infantry soldier.
The Fully-Automated Anthropometrically Correct Sweating Thermo-Regulated Mannequin is a computer-controlled mannequin for the testing of protective clothing with a heated surface that enables it to sweat when moving.
The Chemically Resistant Automated Mannequin and Head-form is a lightweight, chemically resistant, computer controlled articulated mannequin, supported only by the hands, face and feet, for the testing of protective clothing.
The static respirator testing head-form is based on a NIOSH (National Institute of Occupational Safety and Health) medium sized head, designed to test respirator systems.
The Animatronic Respirator Testing Head-Form simulates the realistic movements and breathing routines of combat field operatives.
The Heated and Sweating Head-form System was developed to evaluate fogging and ice propagation in air crew, military and first responder respirators.
The High Temperature Half Mannequin is designed for use in the testing of clothing and headgear in a high temperature challenging environment.
The drop test torso has been designed to test personal protective equipment effectiveness against falls from height.
The Convective Cold Hand is a heated system that simulates the surface of a human hand to measure how well a glove can withstand both convective and contact cold.
This set of 3 test head-forms is used to test the EN13819-1:2001 standard for helmet-mounted earmuffs.

The heated areas comprise of 11 zones that can be individually controlled to temperatures between 25°C and 36°C. The sweat points that can be configured to produce up to 1ml per minute (±10%), giving the mannequin a total sweat rate of up to 3.7 litres an hour.

This system consists of a mannequin and separate upper body head-form for the testing of chemical and biological protective suits and head gear. It is a lightweight, articulated mannequin with the same range of movements as the Porton Man however the only means of support are at its hands, face and feet.

There is also an interchangeable upper body head-form, for use in smaller test chambers and temporary environmental analysis tents. Both the upper body head-form and mannequin have a soft, chemically resistant elastomer skin at garment locus points to provide a realistic seal. This material was specifically developed by i-bodi for this application.

All our Respirator Testing Head-forms comply to ISO standards and are suitable for testing RPD’s Respiratory Protective Devices. The i-bodi Technology head-forms come in a range of sizes including Small, Medium, Large, Short/Wide and Long/Narrow. Each head-form has a stainless- steel ISO 16900-5 trachea which, is designed to be attached to a digital breathing machine, (such as the i-bodi DBM) to simulate live participant breathing.

The front of the face has a 30 Shore Hardness elastomer face skin, (different Shore Hardness can be provided), to provide a less resistant locus point for a respirator. The head-form has two sampling ports in the trachea and a further sample port in the right eye. The under-skull is made from a cast aluminium filled resin, providing some thermal mass, and the whole system is mounted on a robust stainless-steel base.

A heated and sweating system can be added to our head-forms for the evaluation of the fogging and ice propagation in respirators. This head-form is split into three individually heated zones and accommodates twenty-two independently dosed sweat zones mapped across the face and scalp. Visual feedback is from a camera in each eye and the data provided by the control program gives a comprehensive report of when fogging occurred and under what conditions it formed.

This Fully Animatronic Respirator Testing Head-Form simulates the realistic movements (including the human lip, jaw, and neck movements) and breathing routines of combat field operatives. It has been developed to provide fully controllable and repeatable trials to enable for the analyses the functionality of respirators. Any combination of movements and breathing patterns can be used, giving the user complete control of any test configuration It is suitable for use in chemically abrasive chambers.

The High-Temperature Head and Torso Mannequin is designed for use in the testing of clothing and headgear in a high-temperature challenging environment. The head and torso are of medium size and the head-form contains an ISO 16900-5 trachea. The head surface is made of heat resistant silicone rubber and is fixed over a machined aluminium core which provides the thermal mass. The neck and torso are made from a fire retarded GRP.

Our Convective Cold Hands (EN511-2006) product is designed to measure how well a glove can withstand both convective and contact cold. It is made from carbon composite and is heated to provide a uniform surface temperature to simulate that of a human hand. There are two measuring zones, the hand and the forearm. Both areas are heated to the same temperature and the temperature loss of each one is recorded to enable you to measure the effectiveness of the gloves.