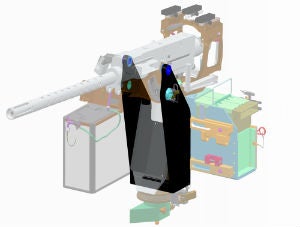 For the first time in its history, Belgium-based FN Herstal has utilised advanced composite material for yoke manufacturing.

The yoke is a critical and complex mechanical component on the FN Medium Door Pintle Turning (FN MDP™ Turning). It is exposed to helicopter vibrations and firing recoil forces of the weapon, and is designed to sustain 20g crash loads as per the existing standards.

By using the advanced composite material, the weight of the yoke is reduced by 30%, decreasing the overall weight of the pintle weapon system – a critical aspect in aeronautics – while maintaining all structural properties of the previous aluminum version.

By integrating advanced technologies and materials in airborne weapon systems, FN Herstal further strengthens its position as a leading solution provider for MODs and OEMs.

The prototype of the newly developed yoke will be on display in the FN Herstal booth – Belgian Pavilion, Hall 2B, Booth no. G53 – during the Paris Air Show in Le Bourget from 17 to 23 June 2013.