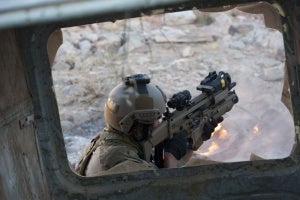 For the first time in Asia, FN Herstal, a world leader in small arms manufacture, will display portable weapons and integrated weapon systems for airborne applications during the Singapore Airshow 2012 on 14 – 19 February 2012, Booth no B23 in the Belgian Pavilion.

FN pintle weapon systems for helicopters and subsonic aircraft are fully mechanical and do not require any electrical power, making firing possible even if the carrier faces problems.

The pintle weapon system on display at the show will be the FN medium window pintle (MWP) that is window-positioned and equipped with a .50cal M3M/GAU-21 machine gun. The M3M/GAU-21 is a worldwide standard for rotary wing applications and is considered by end users as the best optimum performance vs. weight for the benefit of crew protection. Alternatively, FN pintle weapon systems can also be door or ramp-fitted.

The self-contained FN heavy machine gun pod (HMP) presents an all-in-one concept including a .50cal M3P machine gun, 250- or 400-round ammunition box, firing actuator and cocking device in one single casing, ensuring optimum performance in sandy or dusty conditions. An optional configuration is available with three additional 2.75in rockets providing extra firepower. The pod also features a fit and plug concept through 14in Nato standard lugs, for easy and quick adjustment of the helicopter configuration depending on the mission at hand.

In addition to the integrated weapon systems for airborne applications that equip more than 2,800 helicopters and subsonic aircraft worldwide, the world leader in small arms manufacture will display its famous portable weapons: