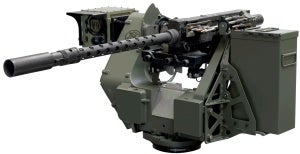 The deFNder Medium will be fitted with a .50 cal FN M3P machine gun, which provides high rate of fire (1,100 RPM) and is a world
exclusive by FN Herstal.

Both deFNder feature unique elevation and depression angles (+80°;-60° for the Light, and approx. +73°;-42° for the Medium, subject to weapon type), and can accept a large number of user-defined features and options such as control handle, sight module, ammunition box and stabilization. They will also be on show on FN Herstal’s booth – Hall 6, Booth no. F200 (Belgian Pavilion).