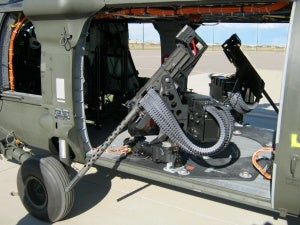 FN Herstal, a world leader in small arms manufacture, will display portable weapons and integrated weapon systems for land and airborne applications during the FIDAE Trade Show, 27 March to 1 April 2012, booth no. F86- the Belgian Pavilion).

FN pintle weapon systems for helicopters and subsonic aircraft are fully mechanical and do not require any electrical power, making firing possible even if the carrier faces problems. The FN pintle-mounted system features a .50 cal or 7.62mm machine gun firing in open bolt mode, ensuring full safety and reliability, and is mounted on a soft mount, guaranteeing outstanding balance during firing, hence increased accuracy.

The pintle weapon system on display at the show will be the FN medium ramp pintle, or MRP, that is ramp-positioned and equipped with a .50 cal M3M/GAU-21 machine gun. FN Herstal’s M3 machine gun, with high firing rate of 1,100 RPM, is a worldwide standard for rotary wing applications and is considered by end users as the best optimum performance vs. weight for the benefit of crew protection. Alternatively, FN pintle weapon systems can also be door or window fitted.

In addition to the integrated weapon systems for airborne applications that equip more than 2,800 helicopters and subsonic aircraft worldwide, the world leader in small arms manufacture will display its wide range of portable weapons, e.g: