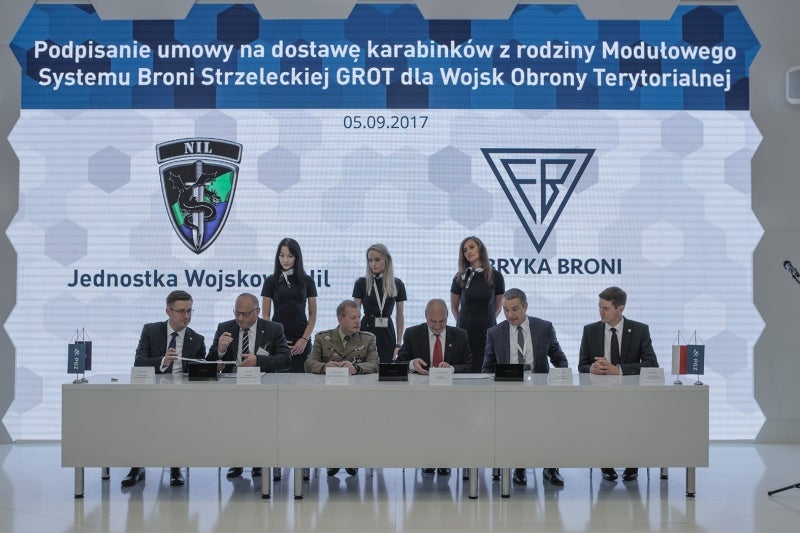 The latest product of Fabryka Broni ‘Łucznik’ – Radom Sp. z o.o. has still been on a winning streak. The first lot of more than 53,000 MSBS (Modular Firearm System) assault rifles will soon go to the Polish Army. A contract worth a few hundred million PLN signed during the MSPO 2017 (International Defence Industry Exhibition) is the biggest of all arms supply contracts after 1989.

Along with the information on concluding the contract, a new name of the assault rifle – ‘Grot’ was announced.

The contract involves the purchase and supply of ‘Grot’ C 16 FB-M1 assault rifle representing the family of assault rifles so far referred to as MSBS (Modular Firearm System).

Adam Suliga, President of the Management Board of Fabryka Broni “Łucznik” – Radom sp. z o.o said: “It is a very important contract for Fabryka Broni. I am glad that the negotiations were completed successfully and the contract was signed. The Polish arms will finally go to the Armed Forces of the Republic of Poland because it is worth remembering that the ‘Grot’ assault rifle of the family of MSBS (Modular Firearm System) rifles is an entirely Polish design developed by Fabryka Broni in cooperation with the Military University of Technology in Warsaw.

“As the President of Fabryka Broni, I am very proud of this fact.”

“The scale of the order resulting from the contract signed today makes this contact one of the biggest contracts for the supply of arms to the Armed Forces of the Republic Forces during last years,” said Błażej Wojnicz, President of the Management Board of PGZ S.A.

“It is even more significant since assault rifles not being a developed version of the previous models, but an entirely new design – developed by Polish engineers and technicians in conformity with the latest world trends of firearm design – will go to military units on such a large scale,” added President Wojnicz.

A 5.56mm MSBS assault rifle has been so far referred to as Modular Firearm System. Now the family of assault rifles has been named ‘Grot’ in order to commemorate a major general Stefan Rowecki pseudonym ‘Grot’, one of the founder members of the Polish Underground State during the World War II, a legionnaire, soldier of September 1939, commander of the Union Armed Struggle and Home Army.

The value of the contract concluded today amounts to a nearly half a billion PLN. Under the contract, the first lot of about a thousand rifles is to equip the Territorial Defence Force this year. The whole order is to be completed by 2020.

Additional information may be obtained from: