Mills Manufacturing is a leading manufacturer of military parachutes. It supplies components to the militaries of more than 60 countries and is a prime defence contractor to the US armed forces.

Mills’ G-14 cargo parachute can deliver non-fragile supplies and equipment weighing a maximum of 500lbs on its own, or when in groups of three, payloads of up to 1,500lbs. With a basic configuration and low-velocity air delivery method, the G-14 cargo parachute is a cost-effective and accurate solution for delivering payloads in rugged or hostile environments.

The G-11 cargo parachute assembly is 100ft in length and is readily available for military use. Depending on the payload and altitude of descent, the G-11 can be used singularly or in clusters. In fact, when used in a cluster of eight, the G-11 can support 42,000lbs in payloads.

All G-11 parachutes are manufactured in strict accordance with MIL-DTL-7620 and MIL-STD-849 standards.

Used predominantly in the deceleration and stabilisation of bulk-type platform air-delivery cargo loads, the G-12 cargo parachute can support a 2,200lb payload in its basic configuration or 3,500lbs when used in a cluster of two.

All parachute cargo assembles are packaged, preserved and packed in accordance with US military specifications, or to a client’s specific packing instructions.

The MC-1B/E is mainly used for premeditated jumps, when a precise landing on a small target is vital for operation success. The parachute features orifices for a gliding descent, and two control lines that enable the user to conduct 360° turns. When packed for service, the MC-1B/E weighs only 29lbs.

An evolution of the basic MC-1B parachute canopy, the MC-1C/D is a maneuverable parachute that is primarily used for premeditated jumps where a soft landing in a small target area is important.

The MC1 comes in two models, the MC1-C and MC1-D. The MC1-C includes the low-porosity canopy cloth PIA-C-44378. The MC1-D incorporates the new universal static line with static line snap.

The T-10 parachute assembly has been successfully parachuting US troops into operations since the 1950s, with relatively few changes to the design over the decades. With upgrades to the canopy, pocket band and depth, and the static line, the T-10 meets all the latest requirements for military applications while maintaining its durable performance and design.

The diameter chest assembly is a 24ft emergency parachute that is intended for use in the case of a malfunction with the primary back type parachute. Weighing only 12lbs when packed, it is instantly activated by pulling the ripcord handle that activates the spring-loaded pilot chute.

All emergency parachutes are manufactured in strict accordance with personnel parachute US military specifications MIL-DTL-6445, MIL-DTL-7567 and MIL-DTL-849.

Mills Manufacturing’s cord subdivision, Miltex Industries, produces 5040 nylon cord that can be used in various military and commercial applications, although it is mainly used on parachute systems within the US military and by foreign customers. The cord comes in a large variety of colours, and can even be treated with a fluorocarbon treatment upon customer request. 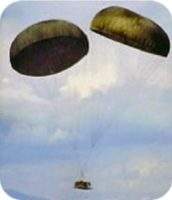 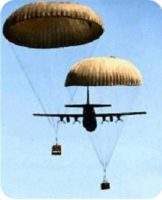 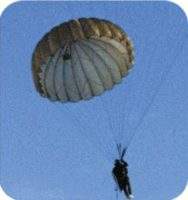