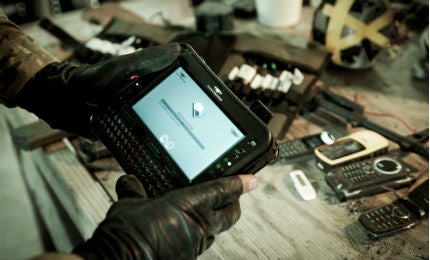 Our exploitation devices are used by security organisations to interrogate and acquire real-time intelligence and evidence gathered from mobile phones, GPS and portable digital devices.

With its headquarters in Southampton, UK, and subsidiaries in the US and Australia, Radio Tactics provide dedicated technical assistance, delivering comprehensive service and advice to every client.

ATHENA has been specifically designed for use by frontline military and intelligence users.
ATHENA is a total intelligence gathering solution for the frontline.
ATHENA includes an onboard camera that can be used to record still and full-motion video for capturing information about the device, people of interest and the general environment.

Terrorists and insurgents are increasingly deploying mobile digital devices to detonate attacks and communicate between different cells, while criminals are also using mobile technology for hostile and criminal activity to access, store and share information, as well as for navigation.

Intelligence and security agencies are focusing on data extraction from mobile devices and the ATHENA solution places this capability in the hands of frontline military agencies.

Developed in partnership with the US, Australian and UK militaries, ATHENA is unique to other communication systems in that it provides support to operators making real-time decisions on the ground when searching for suspects or premises.

In addition to its mobile device data acquisition capabilities, ATHENA is also equipped with an integrated camera to capture still images and motion videos. The system’s internal GPS system can also capture and record positional information to deliver a complete intelligence package.

Rapid acquisition reduces the time taken to acquire information from the target device and allows users to decide what data is valuable during time critical operations. ATHENA can also be interrupted or disconnected at any point during an acquisition, but will still retain the data already acquired to accommodate any sudden operational changes.

Acquisitions are secured from intelligence leakage using AES encryption and deletion to Department of Defence standards.

Identifiable intelligence in the battlefield

Radio Tactics’ Analysis Suite enables security and intelligence forces to identify and create lists of items of interest from acquired data in pre-mission time. The actions and interests list can then be transferred from analysis suite to an ATHENA terminal so every intelligence and battlefield officer’s intelligence package is updated.

ATHENA can also be integrated in the intelligence infrastructure by tethering the responder into back-end intelligence systems through tactical communication networks from IP-based networks to combatant radio systems.

Radio Tactics specifically designed ATHENA for frontline military and intelligence users, and is not a repackaged commercial or law enforcement product. ATHENA is supplied on a rugged ultra-mobile terminal, which is fanless, dust and water-resistant to MIL-STD-810F standard and possesses an IP65 certified 6ft drop rating.

Radio Tactics prides itself on working with customers to build and maintain strong relationships, delivering continual advancements to our intelligence and evidence gathering solutions. In keeping with our excellent customer service, we offer tailored support packages and have a dedicated team that provide rapid response and expert advice to maximise each customer’s operational effectiveness.