Jammer4U’s New Weapon of Choice for Infantry on Terrain

Modern weapons require modern defense, and Jammer4U’s wearable anti-drone wearable is the new weapon of choice in the industry. Infantry drone protection becomes easy with our light, handheld personal device, which has the same power as much bigger units.

Designed to be compact for easy carrying by police and military on terrain, model CT-1040H-DJ is a wearable jammer developed to protect infantry soldiers against commercially available drones used by enemy forces for reconnaissance or as a weapon delivery systems.

The wearable jammer for infantry can help protect troops from drones and provides a military unit drone and remote operated vehicles defense.

It is a fully autonomous device with built-in antennas and a battery capable of providing 40 minutes of operating time. Usual drone downing operation lasts only a few minutes so it can be used approximately ten times between charges. This gives soldiers great autonomy on terrain, and means they can be sure that the device is always ready to be used.

Modern warfare weapons, such as remote operated vehicles and drones, change advantages on terrain very quickly by collecting and delivering intelligence data to the operator in real-time. It is critical to block such attempts, and the only reliable way to do that is through a jamming device.

The CT-1040H-DJ 28W wearable jammer is best suited for military infantry teams, as the only one wearable jammer, per team, can save lives of the whole unit by preventing drone surveillance and a possible drone attack, thus disadvantaging enemy units that rely on drone reconnaissance. 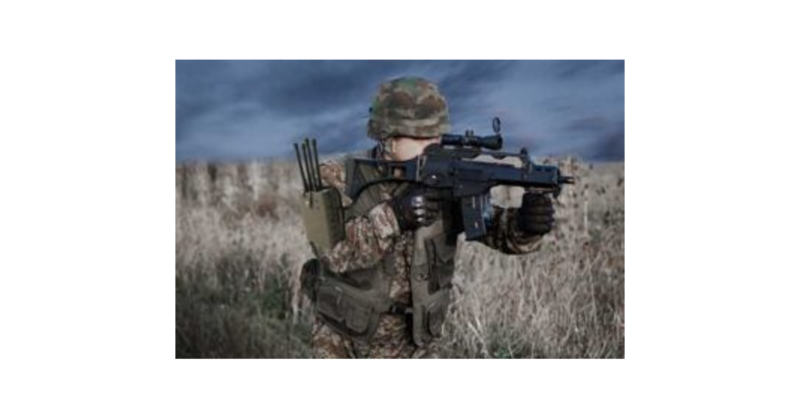 Drones and other remote operated vehicles are getting more sophisticated, and they can perform many complicated tasks; carry mechanical or biological weapons, drop bombs and projectiles, disperse chemical agents, follow infantry units, and more. Being small and mobile, such units are virtually impossible and very dangerous to shoot down. Jamming remote signals is the only quiet and efficient way to disable them.

It is not always required to spot the drone or remote operated vehicle to activate the jammer. You can do it as a preventive measure when entering unfamiliar terrain with possible drone treats. Disabling remote operated vehicles can be of crucial importance in such operations. Drones and such machines do not always have to be in motion, sometimes they are parked on a tree, building, or some other dominating or hidden spot that surveys the area. Preventive jammer activation is, probably, the smartest practice to implement in all future infantry actions.

The CT-1040H-DJ wearable jammer 28W specialises in blocking 2.4Ghz, GPS, and 5.8Ghz signals, which are used by most commercial UAV drones and other remote operated vehicles for their remote controls. This jammer is designed to be at hand for infantry units whose main job is not the drone surveillance and hunting, but for basic anti-drone and remote operated vehicle protection on terrain.

The device is designed to be used by anyone who can turn the switch on and off when needed, and no special training is required. The effective blocking range is up to 500 metres. The jamming distance always varies, depending on the signal strength and location. This unit does not block GSM cell phones.

An operation demonstration of the jammer can be seen here, or for more product information please see here.