Innovative Concepts International (ICI) is based in Tampa, Florida, and was founded in 2005. It manufactures and sells a ground-breaking new technology known as ballistic absorption barriers or BABS, which has a patent pending in manufacturing and encapsulating rubber materials.

BABS will provide superior benefits over conventional materials now being used. In today’s uncertain world, BABS will save lives and minimise injuries in a terrorist or combat situation. These barriers will absorb blasts, ammunition from rifles, shrapnel, rocket propelled grenades (RPG) and hand grenades.

BABS provide superior benefits over conventional materials. Debris and shrapnel from other types of barriers made from cement and rebar have disastrous effects. It is not only the blast, but resulting fragmentation from the explosion that injures and kills people.

BABS utilise recycled scrap tyres to create blast absorption barriers for use in perimeter and check point security, embassy fortification, pipeline protection, and major even security. BABS have been tested at the US Army Aberdeen Proving Ground and demonstrated at the US Marine base in Quantico, VA. BABS were exhibited at the Counter Terror Expo 2010/2011 in London.

Barriers for airports and the battlefield

BABS inherent beneficial properties include excellent sound deadening (noise suppression barriers) for use around airports and on the battlefield.

Placed around oil pipelines and storage tank areas, BABS will prevent vandalism from drilling holes, firing shots and bombs. The barriers will also insulate pipelines and storage areas from corrosion. BABS are modular and free standing, making them easy to install. They have a forgiving footprint that blends well with all terrains and won’t crack if the terrain shifts. Everyone knows cement cracks.

Unlike other types of barriers, BABS are rain and wind erosion resistant which means they will last forever and can be used underwater.

BABS can be used on highways for traffic control and crossover border. Due to the rubber, vehicles will bounce off these barriers instead of demolishing like with concrete or jersey type barriers.

Some civil engineers use BABS for retaining walls and sea walls. In fact, these barriers have won the New York State Governors Award for Civil Engineering Applications.

ICI also produces Eco-Blok, which was developed as a durable and reusable alternative to standard sandbags. At 30lb per block, Eco-Blok is easy to transport and stack. The interlocking design allows for a tight fit along with holes provided for anchoring the blocks together in a vertical wall formation. It can be used in civil engineering projects, erosion control, emergency response, flood control, and military applications. 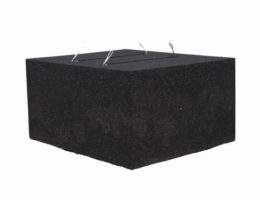 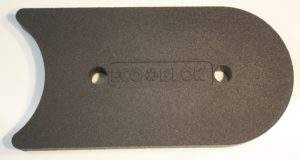