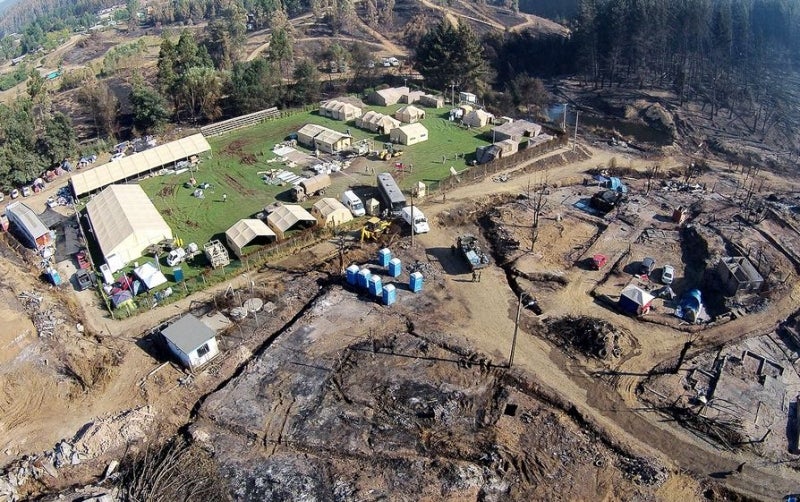 Last January, the Chilean Army centralised its operations in the forest fires that seriously affected our country. Some of the actions carried out included the relocation of an emergency camp provided by Tarpulin.

The military centre was installed in Santa Olga, a small village in the Maule Region, which virtually disappeared after being hit by a violent forest fire. After being declared a zone of catastrophe, the Commander in Chief of the Army, General Humberto Oviedo, arranged to install there the emergency centre.

The camp was a great help to both the military and the community. According to Defense Minister José Antonio Gómez, the military centre served ‘to make coordination and work more efficient for the families affected’.

The facility operated as a military camp, with capacity to house about 120 troops and cover needs for military personnel, who moved to the affected areas. In addition, it provided support to State agencies and served as units for the Ministry of Interior.

Thanks to the facilities of the camp, it was possible to serve the general population, which had drinking water, hygiene services, recreation areas, areas to develop sports. As the camp commander, Alejandro Gorayeb, pointed out, the facilities attended a number of around 2,500 food rations on a daily basis, using continuous shifts in the dining rooms with capacity for 500 people.

Tarpulin, aligned with SITDEF's spirit of delivering efficient and practical solutions, showcased its very own...

Tarpulin® has developed and delivered a portable, rapid deployment and large size workshop, which was...