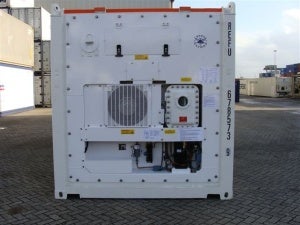 This sort of atmosphere is defined as an air mixture of flammable substances in the form of gases, vapours, mists or dusts, which can ignite under certain conditions. These conditions are most commonly seen in the oil and gas industry.

Since the company’s founding in 1984, Klinge remains committed to providing safe and reliable products to our customers transporting dangerous chemicals or transporting goods in hazardous areas, such as oil rigs.

He continued: "Every component in the evaporator section is explosion proof (since this section is in direct contact with the cargo area) and all external parts are explosion-proof. The unit is also insulated with fire resistant and CFC-free polyurethane foam between the evaporator and condenser section."

The ATEX (or explosion-proof) products directive was developed by the European Commission of Enterprise and Industry and the European Standardisation Organisations to allow the free movement of ATEX equipment and protective systems throughout the EU by removing the need for different national standards. Equipment and products in each group are divided into categories based on the level of protection required.

Klinge’s PFR-571 ZII-II is categorised as group II and category three, meaning equipment is intended for use in areas where explosive atmospheres, caused by gases, vapours, mists or air / dust mixtures, are unlikely to occur or, if they do occur, are likely to do so only infrequently and for a short period only.

The PFR-571 ZII-II is also designed for safe operation in ATEX Zone 2 classified areas which are places in which an explosive atmosphere consisting of a mixture with air of dangerous substances in the form of gas, vapour or mist is not likely to occur in normal operation but, if it does occur, will persist for a short period only.

Offshore containers are used primarily in the oil and gas industry because of their ability to withstand the harsh environment and handling of the offshore industry. Due to the dangerous nature of the oil industry, these containers are subject to many more regulations and must undergo a strict certification process to ensure the safety of personnel working on the oil rigs, oil tankers, as well as the environment.

The combination of Klinge’s ATEX compliant PFR-571 ZII-II and EN12079 and DNV 2.7.1 certified containers makes their offshore refrigerated container the ideal solution for the global offshore oil and gas industry.