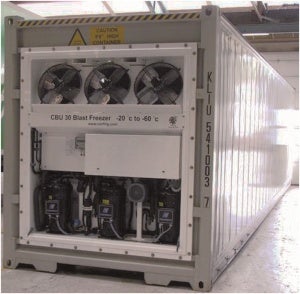 The new lower-cost CBU-30 is available at a reduced price with production of the unit shifting from Kjellerup, Denmark to Klinge Corp headquarters in York, Pennsylvania.

The CBU-30 Blast Freezing equipment previously offered by Norfrig Equipment / Klinge Corp is a highly-favored solution to the challenges of quickly freezing cargo to ultra-low temperatures. The Blast Freezer’s large high capacity centrifugal evaporator fan draws air through the load to ensure even temperatures throughout the load.

Many standard units are not equipped with an evaporator fan system designed to accommodate cargos with high-pressure drops. Without Klinge Corp’s special design, airflow would be reduced and the blast freezing process would take considerably longer.

Just over a year after its purchase of Norfrig Equipment in Denmark, Klinge Corporation has also unveiled a new marinized and rugged Nose-Mount Freezer (NMF)-371. The previous model offered by Norfrig Equipment / Klinge was a well-received solution to the challenges of low-temperature storage, but was largely used in static (i.e. stationary) locations and not necessarily intended for marine transport.