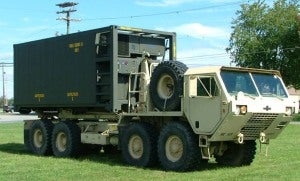 Production of 50 Military Refrigerated A-Frame containers is underway at Klinge Corporation manufacturing facilities in York, Pennsylvania. Initially a contract for 60 Refrigerated Containers, the Swedish Defence (Forsvars Materialverk, or FMV for short) ordered an additional 50 units to be delivered by the first half of 2014.

Vice-president Allan Klinge said, "Klinge Corporation is excited for Phase III of the project to continue manufacturing of special A Frame Refrigerated Containers for the Swedish Defence. The contract has expanded to nearly twice the size of the initial contract for a total value of more than $9m.

"The option to extend the contract showcases the innovative engineering concepts and quality manufacturing techniques Klinge Corporation applied to their military transport refrigeration equipment. The equipment was qualified to numerous military standards and is rugged to withstand the harsh environments encountered in the field."

The training represented a culmination of numerous project milestones, including design reviews, preparation of extensive technical documentation and successful completion of military testing.

Lead service technician Tony Strine, who was in charge of the training, said, "Technical training is taken very seriously by Klinge Corporation. It is critical that users and technicians gain an overview of the fundamentals of the equipment. While our Military Refrigerated Containers are easy to operate, obtaining basic knowledge of the equipment will ensure the equipment runs as it should for a very long time."

Using the detailed military-grade technical manuals prepared under the contract, the special training course provided an overview of the complete refrigeration, power generation, and container system and included routine inspection tasks, troubleshooting items, and preventative maintenance tasks. Training slides were also prepared in Swedish to cover the design and functionality of the equipment as well as preventative maintenance items.