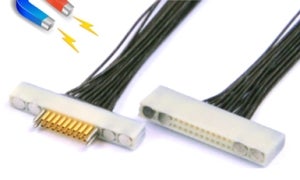 From inside the box to board-to-board connections, this family of Nano-miniature connectors makes the tough connections look easy, even though mating such a small connector typically has its challenges.

Omnetics’ Nano-strip connector at 25in (64mm) pitch are some of the smallest connectors on the market today, making the act of
mating and de-mating such a small connecter even that much more important.

Previously, much of this had to do with utilising the polarisation features that Omnetics has created for its customers.

Omnetics standard Nano strips currently allow users the ability to include a guide pin feature(s) to any of its Nano Strip
configurations.

These guide pins consist of a protruding stainless steel pin (used on the socket side only) that aids users in the mating
and de-mating motion. This simple addition has helped many designers successfully mate and de-mate without issue, however,
a number of users are still looking for additional mating options.

This new feature helps users clearly identify and locate the correct mating orientation prior to mating the connectors together.

This functional improvement has been made by Omnetics design team in an attempt to prevent contacts from being damaged in the case of an incorrect mating attempt.

Omnetics magnetic Nano-strip option is designed so the rectangular shaped connector itself can only be inserted one way, just as the guide pin feature would.