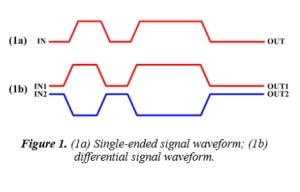 In previous installments of this series, we provided a general overview of the concept of impedance. In this installment, we shift gears to discuss differential signalling, the primary method that high-speed digital signals are transferred.

Differential signalling is used because it offers advantages over single-ended signalling. The main advantage is improved noise immunity, which minimises electromagnetic interference (EMI). To understand this, take a look at the signal waveforms in Figure 2.

In the single-ended system, the noise will be detected at the output. However, as long as noise appears similarly on both differential lines (which it often does provided the lines are in close proximity), the output of a differential signal will be immune to external noise. 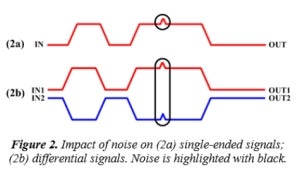 This is because the differential system output measures the difference between the two signals, cancelling out the noise at the output. Noise immunity is the biggest advantage that differential signals have over single-ended signals.

The other major benefit, particularly in cables and connectors, is that designing for a 100Ω differential impedance is easier than designing for 50Ω single-ended.

Since impedance is a function of geometry, this is simply a matter of physics. Standard non-impedance controlled designs have an impedance that is closer to 100Ω. Therefore, it typically requires less drastic design changes to match a system to 100Ω than it does to match to 50Ω.