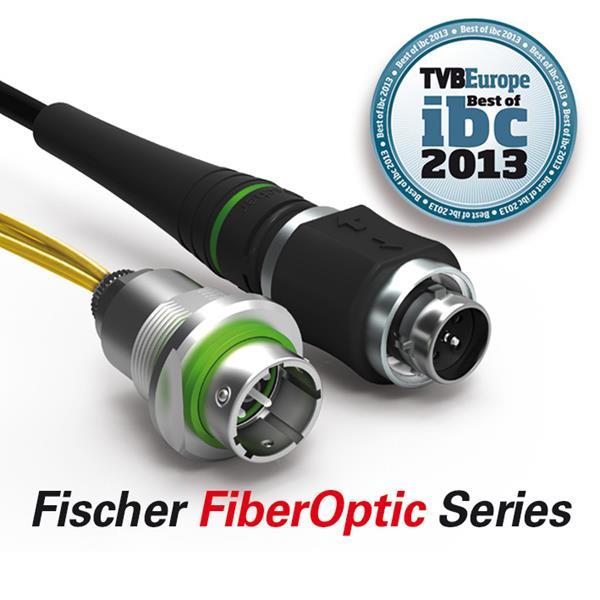 Fischer Connectors, a worldwide leader in the broadcast connector industry, is pleased to announce that its Fischer FiberOptic series has been awarded a ‘Best of IBC 2013’ award in the category production and infrastructure. After receiving this award for the Fischer 1051 HD Triax Pro+™ in 2010, it is the second time in less than five years that Fischer Connectors has been recognised as one of the most innovative companies by the broadcast industry.

The Fischer FiberOptic series, showcased at the IBC stand of Fischer Connectors, features some major revolutionary novelties. Fischer Connectors is able to offer a fiber solution that is extremely quick and easy to clean in the field thanks to a removable mono-block mate adapter and to the possibility of rinsing the unmated connectors freely under water or in an ultrasound bath. It has a high ingress protection of IP68 (2m/24hours) when mated and IP67 in unmated conditions. In addition to this, the Fischer FiberOptic series’ optical performance is insensitive to mechanical strain on the connector, while gas tight options are available.

Fischer Connectors Holding SA CEO Dominique Glauser said, ‘We are honored that the broadcast industry gives us recognition for our Fischer FiberOptic Series.

"Given that more than 1,400 exhibitors were present at IBC this year, we are proud that experts have chosen the Fischer FiberOptic series to be among the most innovative products present."

The ‘Best of IBC’ Awards, organised by TVBEurope, recognise the most interesting and exciting innovations presented at IBC, the biggest worldwide broadcast exhibition that took place in Amsterdam, Netherlands this September. The teams from TVBEurope and the IBC Daily newsletter come together to acknowledge and reward game-changing solutions, focusing on products that add greater efficiency, simplicity and cost-effectiveness to broadcast workflows.

According to TVB Europe, thousands of new products appeared at IBC this year, with a wide spectrum of applications. Some offered simple solutions to long-standing problems, others raised the bar of quality higher and others were revolutionary, like the Fischer FiberOptic series.
The Fischer FiberOptic series is not solely for broadcast solutions, but has already proven its success in a wide range of fields requiring faultless quality in outdoor or demanding applications, such as transport and mobility, telecom, energy, defense and security, construction and infrastructure and medical devices.

This paper gives an overview of current trends in wearable technologies, and dives deeper into...