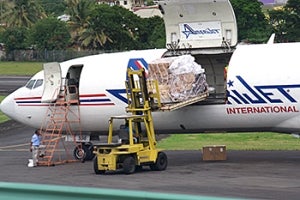 In late May 2016, a shipment of equipment from Barrett Communications was delivered to the island group of Saint Vincent and the Grenadines, located in the Caribbean Sea, between Saint Lucia and Grenada. These islands are located within "the hurricane belt" and with the 2016 season soon to commence, the shipment was greatly anticipated.

The donation shipment was the eventual result of an article written by The Rainbow Radio League’s (RRL) Director, Mr Donald De Riggs, in an American radio communications publication. RRL is a non-profit volunteer organisation with emergency communications as its specialty.

Their requirement, in terms of communications, was for emergency and disaster preparedness radio equipment that was reliable, inexpensive to run and easy to operate over an ongoing basis. Recognising that the requirement reflected Barrett’s range of equipment and services, the company decided to make contact with Mr Riggs with a view to offering some assistance to RRL.

As a result of detailed discussions about their need to strengthen emergency radio communications, an agreement was made and a range of ex-demonstration, high-frequency (HF) and very high-frequency (VHF) radio communications equipment was dispatched to RRL. The agreement includes two Barrett 2050 HF transceivers, one in base station and the other in vehicle configuration, two 2090 HF Manpacks, four PRC-2090 HF base stations, three PRC-2080 VHF handheld transceivers and one PRC-2082 VHF base station.

The majority of the HF equipment has been earmarked for the Grenadines, which has the greatest need for emergency communications equipment.

It was critical that the equipment supplied would be operational directly after a natural disaster with no power or infrastructure in place. Barrett also supplied 14 solar panels that can be used to charge batteries that will power the equipment.

Mr De Riggs commented: "Within one week of receiving the equipment, some of the portable equipment was used to provide support communications for an outdoor motor sporting event at Mt. William. The Barrett radio equipment improved the service during this event."

Mr De Riggs went on to say: "The results so far from the testing we have done, even at low power, have been very encouraging.

"The Barrett 2090 HF Manpack has an outstanding receiver, which is important, because even if you cannot communicate with base, hearing a lifesaving announcement or command matters a lot."

Due to the remoteness of the island country, the response time by regional and international response agencies, especially if the event is catastrophic, is critical. The HF systems will replace salt damaged equipment at Clifton Health Center in Union Island, another in Mayreau, Canouan and the other at Paget farm Bequia.

In St. Vincent, another will be placed at Fancy and the other at RRL HQ in Kingstown. The new equipment will be installed over the next few months. Barrett will provide further updates of RRL’s progress in the future as they roll out their emergency radio communications network.