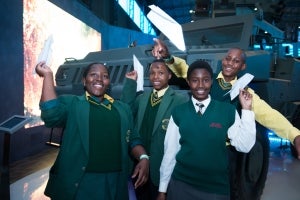 The sponsorship of R150,000 contributed to the attendance of 3,000 South African schoolchildren (aged four to 18) at AAD to learn about career prospects in the defence and aerospace industry.

"The defence and aerospace industry represents the pinnacle of technology and South Africa has an outstanding reputation for designing and manufacturing world-leading products. But it is critical that we invest in the next generation of African engineers to ensure that we continue to innovate and compete globally.

"Paramount Group was extremely pleased to be able to contribute to this year’s Youth Development Programme, which provided practical advice and education to thousands of South Africans."

The Youth Development Programme is aimed at creating awareness for career opportunities in the defence and aerospace industries in South Africa. The programme started in 2004, with a modest 500 learners, but now inspires over 3000 learners to consider a career in the defence industry.

As part of the Youth Development Programme sponsorship, hundreds of local schoolchildren visited Paramount Group’s stand to learn more about exciting career opportunities and technologies that African defence companies can offer not just in Africa but globally.

In addition to its activity at AAD, each year the Youth Development Programme provides assistance to a number of schools for disabled children or those with learning difficulties and those from disadvantaged communities.

In 2012 the YDP supported schools by distributing Tutu Desks, which is a flexible writing surface that sits on a learner’s lap and mimics a traditional desk. With 90 million children across Africa in need of desks, Tutu Desk’s are a mobile and affordable solution.

The donation from Paramount Group and other sponsors made it possible to donate 1600 Tutu Desks to three schools in the town of Hammanskraal that lack proper desks and infrastructure.

The South African Minister of Defence, Nosiviwe Mapisa-Nqakula, along with other representatives, including those from Paramount Group, were on hand to distribute these desks to the deserving learners.

The defence industry is an important part of South Africa’s economy, representing 7% of the country’s manufacturing base and employing 15,000 people. Importantly, the sector is regarded as an extremely innovative part of the economy spawning other new technologies that create jobs and wealth.

"Paramount Group made it possible for us to present an excellent programme to the learners from diverse backgrounds and they were given the opportunity to open their minds to new dimensions in career opportunities.

"This sponsorship is testament to Paramount’s social responsibility commitment and willingness to create opportunities for the adults of tomorrow.

"The schoolchildren not only experienced new prospects, but they had a great deal of fun too. The feedback from the schools is extremely positive and they were very impressed by the activities presented to them."

In addition to the Youth Development Programme, Paramount Group hosted 30 top engineering students from the African Leadership Academy (ALA), which is committed to developing the next generation of African leaders.

Paramount’s impressive stand, which demonstrated their capability across land, aerospace and electronic systems was the perfect setting for a private tour for the students to experience some of Africa’s leading technologies and solutions.