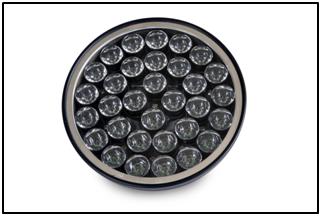 Oxley has been working with Saab for the last five years to design, develop and qualify a set of high intensity landing and taxi lights for the Gripen aircraft, as the proving ground for the introduction of LED lighting across the military and commercial aircraft sector.

These fixtures will replace the conventional halogen lights which require frequent and costly replacement due to the damage sustained by shock and vibration, and performance degradation in extreme operating temperatures.

Oxley LED lights are highly resistant to shock and vibration (including gunfire) and operate effectively across a wide range of temperatures. They are designed to deliver sustained performance in these arduous conditions and offer significant through-life cost benefits to the aircraft. Mean Time Between Failure is in excess of 13,000 hours for the landing light and 14,000 hours for the taxi light, compared to halogen units which typically require replacement after as little as 2.5 hours of service in these environments.
The new LED lights are totally self-contained and are designed as "plug and play" to allow easy retrofitting of LED units to replace halogen lights. The Saab landing and taxi lights is also NVG (Night Vision Goggle) friendly and emit significantly less infra-red radiation than a standard halogen light.