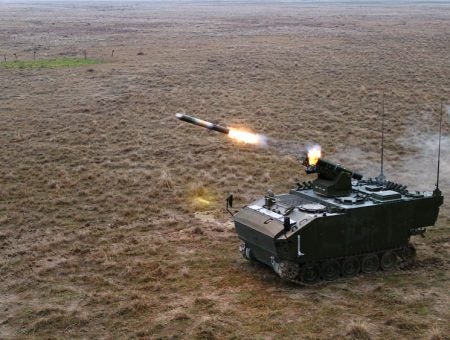 Developed by FNSS to meet the stringent requirements of the Turkish Armed Forces, the KAPLAN ANTI-TANK is being showcased at IDEF’19 with a prototype that is on the verge of completing its qualification process. The vehicle has been developed specifically for an anti-tank role, and has successfully completed firing tests performed using KORNET and OMTAS missiles launched from the FNSS’ Anti-Tank Remote Controlled Turret (ARCT).

Developed as part of the Anti-Tank Vehicles (ATV) project led by Presidency of Defence Industries (SSB), KAPLAN ANTI-TANK is the smallest member of the KAPLAN new-generation armoured combat vehicle family of FNSS. The vehicle has an automatic transmission and the ability to operate jointly with main battle tanks, and can execute a broad variety of missions with the integration of different subsystems. The vehicle also features mine and armoured protection, and offers high mobility under different geographical conditions thanks to its low-weight hull and five road wheels. KAPLAN ANTI- TANK boasts high and rapid mobility in both cold and hot climates, on muddy and rough terrain, and on both asphalt and stabilised roads, while its advanced suspension track system has been designed to minimise vibrations in the vehicle and to enhance roadholding.

As an amphibious vehicle, KAPLAN ANTI-TANK stands out as one of the few vehicles in its class possessing this ability. With two water propulsion systems located at the rear, the vehicle allows its users to carry out operations even in deep and turbulent waters. The hatches and lids on the vehicle’s hull have all been fitted with water-tight gaskets, and the vehicle allows its users to enter the water without prior preparation. The hull of KAPLAN ANTI-TANK is manufactured from ballistic materials, and is assembled using a ballistic welding technique. The power pack cabin and the expanded driver area are located at the front of the vehicle, while the gunner and the commander areas are located in the middle. The rear section of the vehicle accommodates the assistant gunner and any additional personnel.

For its firepower, KAPLAN ANTI-TANK relies on ARTC, which was developed to feature modern firing and command & control capabilities. In addition to the ready-to-fire missiles, the turret is also fitted with a 7.62 mm co-axial machine gun.

Following the completion of qualification tests, serial production of the KAPLAN ANTI-TANK will begin soon afterwards, and all deliveries as part of the ATV project are expected to be completed in 2021.

Noting that KAPLAN ANTI-TANK is the first member of the KAPLAN new generation armoured combat vehicle family to enter the inventory, K. Nail Kurt, General Manager and CEO of FNSS, said: “With the KAPLAN product family, FNSS has redefined the standards in the field of tracked armoured vehicles for the upcoming period, and we are excited to see the smallest member of this product family, KAPLAN ANTI-TANK, in the flesh. Turkish Land Forces defined a unique concept in order to demonstrate its need. The Presidency of Defence Industries designed the project such that this need would be satisfied in the most efficient manner, based on an indigenous solution, and the task was ultimately given to FNSS, Turkey’s leading enterprise in its sector. I am certain that, given the momentum we have gained in the project, we will complete both the final acceptance and serial production stages in a very short time.