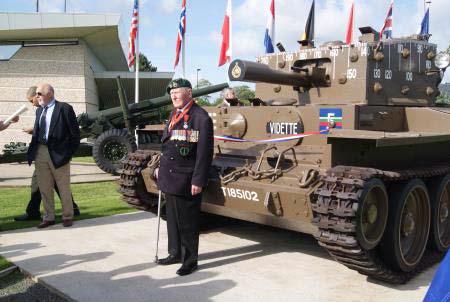 Cobham engineers including apprentices Claire Bewley and Sam Day have helped the Memorial Pegasus Museum in Normandy, France, restore a famous British Centaur Close Support Mk IV tank – called Vidette – to its original former glory. Vidette was one of only 80 Centaur IV tanks ever built, one of only five thought to remain in existence, and the only Centaur Mark IV known to survive the June 1944 D-Day landings.

Vidette suffered extensive damage when hit by gun fire after leaving Sword Beach. The tank has stood on the banks of the Caen Canal opposite the museum near Pegaus Bridge in very poor condition, and requiring a great deal of restoration. The focus of Cobham’s work was to replace the tank’s track guard covers, tools and storage boxes.

As part of the Memorial Pegasus museum’s ceremony commemorating the 70th anniversary of D-Day, the fully restored Vidette was inaugurated by the museum and was a highlight of the ceremony. In attendance at the ceremony were some of the veterans that took part in the Normandy landings, including a Centaur tank gun loader, Mr Pat Churchill, who fought on Juno Beach.

Dr Robert Pearson, General Manager of Cobham in Leatherhead, who attended the ceremony, said: "It was a tremendous honour for Cobham to be invited to attend the inauguration ceremony by Mark Worthington, the Curator of Memorial Pegasus and to have the opportunity to meet veteran Pat Churchill, a member of the crew of a Centaur on D-Day. This was an experience which Cobham has been very proud to support and that the team will never forget."