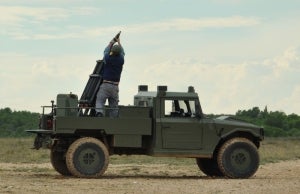 Representatives of armed forces, both domestic and foreign, witnessed the different exercises that were carried out.

The demonstration, which took place at the Spanish Army’s San Gregorio National Training Center, consisted of a theoretical presentation of the products, followed shortly thereafter by five dynamic tests, which allowed the delegations present at the site to examine, firsthand, the main characteristics and performance qualities that EXPAL mortar systems feature.

The company’s continuous R+D effort that has enabled EXPAL to develop a comprehensive catalogue of solutions, both in product range and performance capabilities, was reflected throughout the day.

During the meeting, EIMOS, EXPAL’s integrated mortar system which combines an 81 mm mortar with a 4×4 light vehicle, was reviewed, and the weapon system’s firepower and excellent time reactions were demonstrated. During the exercises the EIMOS fired in different positions on the ground which lays EIMOS’s mobility, and also showed, in combination with a 60 mm EXPAL COMBI MORTAR, its firepower and quick responses.

The EIMOS system has TECHFIRE, EXPAL’s fire support information system integrated within it, optimizing its capacity for precision shooting, as well as improving coordination and streamlining the decision-making process.

The system’s configuration includes a micro-UAV, UFO-UAV (Unmanned Forward Observer), which work as forward observer. The aerial reconnaissance device is shaped like a bird, silent and unobtrusive, and featured a day / night-vision camera and a laser rangefinder that aided in setting the location of the target during the combined exercise.

Other products featured during the day’s events included among others a RP and illuminating IR munitions, as well as the on-vehicle command mortar kit, which permits its use on jeeps.

Finally, the demonstration of the EXPAL-developed e-Traids tool is worth highlighting; it was created within the Integrated Logistic Support (ILS) area, which is at the full disposal of the company’s customers, and which was presented to the delegations present. e-Traids is a tool that helps manage the technical documentation of products in an interactive digital format, facilitating the operation, maintenance, logistics and training of users.

EXPAL has carried out a new presentation of its recent development of the onboard Mortar...

EXPAL Systems Showcases its Latest Innovations in Munitions, Weapon Systems And Global Capabilities Across Air, Land and Sea at IDEX 2021

EXPAL has further developed its mortar systems capabilities including the new Dual-EIMOS 81mm solution with...