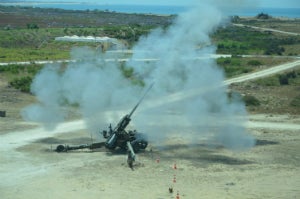 The tests took place on the 26 and 27 May. They were witnessed by technical and operational personnel of the Spanish Army and Navy and by members of five international delegations.

These tests took place to mark the closing of the field artillery ammunition conference organised by EXPAL.

During the conference, a demonstration of EXPAL’s 155 ER-02 A1 extended-range ammunition was given. The main objective of the live-fire tests was to establish the maximum ranges of the two versions of the ER-02 A1 projectile; the boat-tail one (BT) and the one with a base bleed unit (BB). For the propulsion, optimised modular charge for the 155/52 SIAC howitzer was used.

The Torregorda Test Centre helped organise and host the conference, playing an active role in its success. Guests included representatives of the army, marine corps, the Technological Institute ‘La Marañosa’ (ITM) and the General Directorate of Armament and Material (DGAM), as well as five army delegations of other countries.

The tests carried out demonstrated the reliability of this ammunition, which has also been optimised for use on the 52 calibre howitzer, thus extending its use to other howitzers as well as the traditional M-109 A5.

EXPAL already manufacture and sell The 155 ER-02 A1 ammunition in other countries. The product is the outcome of a R&D programme initiated in 1999 by the DGAM to design 155 high-performance ammunition for the Spanish Army and Navy.

During the conference, a presentation was given on EXPAL’s other developments in progress, such as new electronic fuses, multispectral smoke projectiles, infrared (IR) illuminating projectiles and guided projectiles.