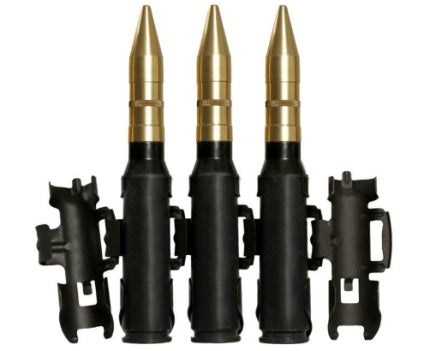 Each of our links is specifically designed to suit a specific weapon and ammunition, ensuring continuous fire and smooth feed. We also supply accessories, such as cartridge clips and insertion strips for fast and simple loading of the belt.

Our metal forming expertise comes through implementing progressive follow-up dies and high-speed, multi-slide, cutting-bending machines. This is combined with heat and surface treatment and in-house, integrated installations, fully automated at all stages of production.

Our complete inventory of quality inspection equipment and gauges enable us to provide the highest quality and service to ISO 9001-2008 standard and NATO STANAG and US MIL specifications.

20mm and 23mm links are available to belt ammunition for weapons such as the M61 Vulcan gattling gun and the Mk.12, which utilizes the MK-7 feed mechanism to supply MK-100 series 20mm electrically primed ammunition.

A wide range of links is available for large caliber ammunitions between 25mm and 35mm. These include ammunition links for the M230, M791 and M242 chain-gun, Giat M811, DEFA 30-550/30-781 and Nudelman-Richter NR-30. Links are also available to belt ammunition for the following weapons:

We also provide links for 40mm automatic grenade launcher ammunition. These links are suitable for use with the MK-19, CIS 40 GL, LAG 40 SB and the Heckler & Koch Grenade Machine Gun (GMG).

One year after the implementation of its new water effluent treatment station, Eurolinks now exceeds...

One year after the implementation of its new water effluent treatment station, Eurolinks now exceeds the requirements of the authorities in terms of de-pollution.

How is activity in the aerospace, defense and security sector recovering from Covid-19’s impact?