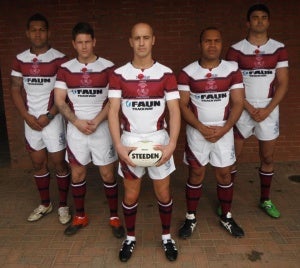 Here at Trackway our engineering pedigree extends beyond our reputation in the field, as we have been the official sponsors of The Sappers – a Royal Engineers Rugby League Team – for over two years now, and have proudly watched them go from strength to strength.

We have recently confirmed our sponsorship of the team for next season and our renewed support has just been unveiled on their brand new strip.

As well as kit makeovers our sponsorship also helps fund one day tournaments for The Sappers against other military Rugby League teams with the next festival taking place at Leeds Rhinos’ Headingley Carnegie Stadium later on in the summer.

The Sappers are one of the most successful military Rugby League teams and they have been in every final of the prestigious Lawson Cup for the past 16 consecutive years, taking home the trophy 13 times.

They are well on track for victory this season as only one match stands between them and the final.

We think the boys look unbeatable in their new kit and we’re hopefully going to watch them lift the Lawson Cup for the 14th time when the season finishes in July.

FAUN Trackway® is delighted to confirm its expansion into the nuclear sector after securing Fit For Nuclear...

September was a busy month for FAUN Trackway® as the company exhibited its product capabilities across...

FAUN Trackway® has been the global leader in the design, manufacture and supply of expeditionary...