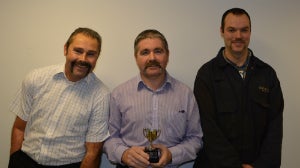 The men of team Trackway have been growing moustaches to raise money for the charity event Movember this month.

Taking part for the whole of November, the challenge requires men to grow the best moustache so that they can raise awareness and vital funds for the Movember Foundation and its men’s health programmes.

The ‘Best Tache at Trackway’ competition was launched at FAUN Trackway HQ at the beginning of the month, with all sponsorship and donations going towards the cause.

The team has taken the contest very seriously over the past 30 days, and we’ve spotted some weird and wonderful visions around the site!

The winner of the challenge was announced as Neil MacDonald for his inspired effort!

Also, congratulations to our runners up Paul Davies and Graham Hughes.

A big thank you goes to every person taking part and to those who sponsored them. Well done all!