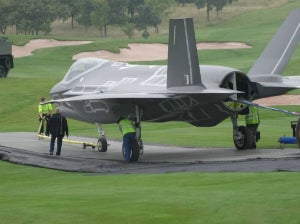 The FAUN Trackway team made suer they were in attendance when Nato decended on Newport, South Wales, for its 2014 Summit in September.

With demonstration units Nia (Trackrack with 50m MLC 70), Angharad (Spoolrack with additional 50m MLC 70), Anton (Spoolrack trailer) and Burt (8×8 IVECO chassis) in attendance, FAUN was able to showcase its products to the world at Celtic Manor during the Summit.
While traditionally used as temporary roadways for land vehicles, the MLC 70 Trackway demonstrated its versatility when it was used by the UKTI Defence Support Organisation to help showcase the Lockhead Martin F35 Lightening aircraft that was on display at the Summit.

The plane, which was 11t, was used as a backdrop for media reports and interviews with Nato leaders.

In order for it to be transported to the 18th fairway on the golf course, without causing any damage to the surface, 100m of FAUN’s MLC 70 Trackway was used by the UKTI team to manoeuvre the plane into position.

It was then easily removed, ensuring no damage to the fairway, after the summit.

FAUN’s Welsh workforce have been manufacturing the elite systems for armed forces around the world for more than 60 years.