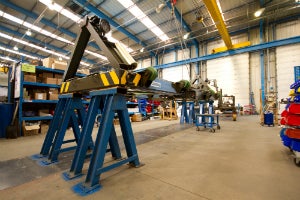 Faun Trackway is pleased to announced it has been chosen finalist for the Made in Wales Awards as Manufacturer of the Year.

The Insider Made in Wales Awards celebrate the achievements of Welsh businesses on both a national and global scale. Finalists will be assessed by a team of judges at the Mercure Holland House Hotel Cardiff, on the 23rd October 2014, where the winners will be announced.

So far 2014 has seen Faun Trackway receive its biggest ever order, commission a third order from the Irish Defence Forces, develop products with both the Australian and Danish Armed Forces, and secure its first ever order from North America, with the Canadian Hamlet of Kugluktuk’s purchase of the company’s boat ramp kit.

FAUN Trackway director Chris Kendall said: "We’ve had a brilliant year in 2014 and to be nominated for the Made in Wales Awards is a testament to the work that the team does here in Anglesey and the quality of the product that we produce.

"FAUN Trackway has been based in Llangefni for more than 60 years, and we’re proud of our Welsh heritage.

"We’re honoured to fly the flag around the world for Wales."