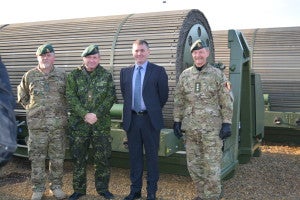 The Faun Trackway team have completed a 16 unit order for the Danish Armed Forces.

In less than a year, FAUN Trackway have gone from receiving the order to implementing the final delivery, which is an achievement the firm is very proud of.

The process started in November 2012, with product demonstrations, before the tender became available in June 2013. Faun Trackway received the final order in February 2014 and now, under a year later, all of the systems are in Denmark.

Four Beam Dispenser LITEs were developed specifically for Denmark after Faun Trackway were asked to create an adaptable product that would be compatible with the class 30 Trackway the force already held in its inventory.

The MGMS-BD LITE has been manufactured to facilitate the rapid deployment and collection of the firm’s Trackway. It has aluminium panels that are capable of withstanding loads of up to 30t, to help vehicles traverse difficult terrain.

As part of the order, the Danish Defence Acquisition and Logistics Organisation (DALO) also ordered nine Trackracks. These are a specially designed launch, recover, transportation, and storage system for FAUN’s Trackway panels. DALO also ordered three Spoolracks, which are designed to store and transport additional lengths of Trackway.

Royal Engineers from the British Armed Forces were sent to Denmark for four weeks to train 30 members of the Danish Army on Faun Trackway’s MGMS-BD LITE systems.

FAUN Trackway director Chris Kendall said: "On behalf of everyone at FAUN Trackway I would like to thank the Danish Defence Acquisition and Logistics Organisation and the Danish Armed Forces for the great working relationship that we’ve enjoyed, particularly with Lars Schmidt, Lars Andressen, and Henrik Juncher.

"We wish you all the best for the future and hope our products will enjoy a key place in the inventory of the Danish Armed Forces for decades to come."