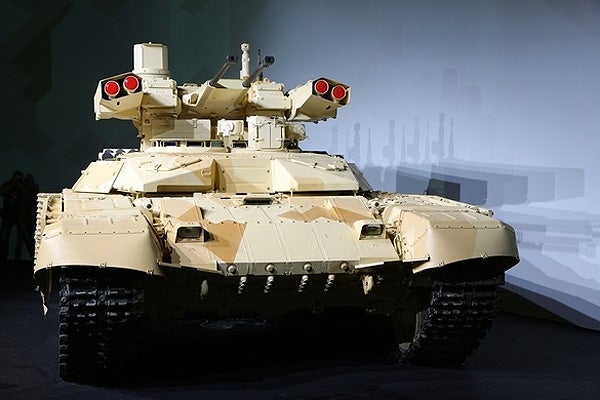 The BMPT-72 was launched at the Russian Arms Expo (RAE) exhibition in Nizhny Tagil, Russia, in September 2013.

The new vehicle, fitted with guided weapon system, is capable of destroying infantry vehicles, enemy tanks and other armoured objects.

"The BMPT-72 was launched at the Russian Arms Expo (RAE) exhibition in Nizhny Tagil, Russia, in September 2013."

The multipurpose tank support combat vehicle BMPT-72 is built on the chassis of T-72 battle tank.

The BMPT-72 can survive in different climatic zones, including urban areas, and in any light conditions.

The crew size of the BMPT-72 has been reduced to three, by removing two grenade launching positions aboard the BMPT. The driver sits in the centre of the forward hull, while the gunner and commander positions are at the rear.

The new vehicle offers improved gun power, protection and command and control system over the BMPT. The combat weight is also reduced from 47t to 44t. The length and width of the vehicle are 7.2m and 3.59m respectively.

The tank features sighting and thermal channels, a laser range finder, integrated laser control channel for missile guidance and independent stabilisation of field of vision in azimuth and elevation planes, to enable the multispectral gunner’s sight.

"The multipurpose tank support combat vehicle BMPT-72 is built on the chassis of T-72 battle tank."

The commander is provided with panoramic sight and the gunner’s position is fitted with day periscopes. The sighting channel allows the gunner and commander to detect targets at 5,000m distance during day time.

The BMPT-72 is provided with an increased fire control system for terrain observation and target location in all weather and any light conditions.

The vehicle is equipped with a ballistic computer with a set of weather and topographical sending units.

The BMPT-72 includes steel armoured hull and turret. The protection is further enhanced with the addition of multipurpose and modular explosive reactive armour (ERA) on the forward and sides of the vehicle.

The rear hull is attached with grilled shields for protection against rocket-propelled grenades.

Six smoke grenade launchers installed either side of the turret can create a smoke screen, to conceal the vehicle from hostile forces. The vehicle is also equipped with a collective NBC (Nuclear, Biological and Chemical) protection system.

The transmission is provided by seven forward gears and a reverse gear.

The vehicle is fitted with a DGU 5-P27.5-VM1or DGU8-P27.5-VM-1 diesel-generator unit producing 5kW or 8kW of electric power. The generator is placed in the armoured compartment on left plate above the track.

The vehicle is equipped with torsion bar suspension system on each side, including six road wheels with idler at forward and drive sprocket at rear.

The inside of the track is stabilised by three return rollers.

The BMPT-72 has a maximum road speed of 60km/h and can reach a maximum distance of 500km with external fuel tanks.

The vehicle is capable of crossing a trench of 2.8m.

The Mi-8 is a multipurpose helicopter produced in a number of variants.