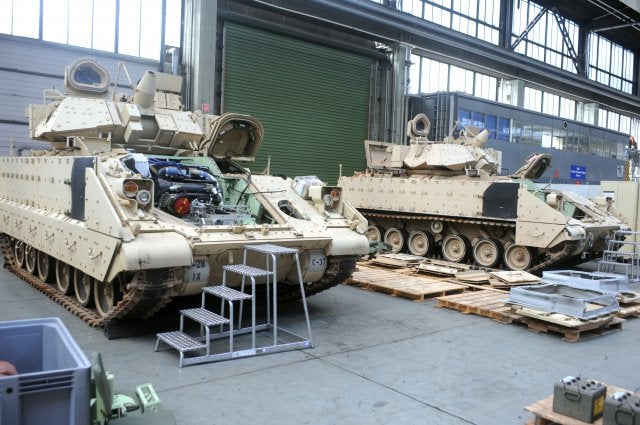 The US Army has begun a revamp and shipment of its M2A2 Bradley infantry fighting vehicles from Kaiserslautern army depot, Germany to the US.

About 88 Bradley vehicles are being prepared for departure by the US Army's 21st theater sustainment command's theater logistics support center-Europe and maintenance activity Kaiserslautern.

The European rotational force and the NATO response force, which are currently assigned to the first brigade combat team, first cavalry division in Fort Hood, Texas, US, will use the remaining Bradleys and Abrams main battle tanks in Germany.

The supply activity Europe operations specialist, Jürgen E. Phillips, said the vehicles will be assessed and refitted with the newest equipment following its arrival in Texas.

"By updating and re-assigning these vehicles instead of buying new ones, the army is saving money."

"By updating and re-assigning these vehicles instead of buying new ones, the army is saving money," Phillips said.

Each vehicle will be stripped of plate armour, weapons, mechanical components and the engine and will be meticulously cleaned before being transported to the US.

Prior to going through a thorough cleaning at the theater logistics support center-Europe's (TLSC-E) wash rack, each of the $1.3m vehicles will be drained of oil, fuel and any other fluids.

The vehicles, which will be then assessed in Texas, are re-assigned to other army units if necessary, following completion of the update.

"We are hoping to send the last of these vehicles back to the states by the end of this year or early next year."