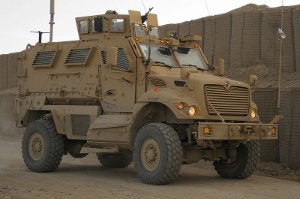 Design, integration and production of the prototypes was completed by TARDEC in six months, with support from the Red River Army Depot, Program Manager MRAP, the Communication and Electronics Research, Development and Engineering Center and the System of Systems Integration (SoSI) Directorate.

The vehicles include MRAP All-Terrain Vehicle Soldier Network Extension, M-ATV Point of Presence, and MRAP MaxxPro Dash; they have also been delivered to the Army’s Aberdeen Proving Ground (APG) in Maryland, US, for safety release / network verification testing.

SoSI Directorate synchronised fielding director Paul Wilson said: ”In order to quickly get these capabilities to the field, we incorporated lessons learned from the NIEs that allowed us to streamline engineering, prototyping and production build designs near simultaneously.”

"In order to quickly get these capabilities to the field, we incorporated lessons learned from the NIEs that allowed us to streamline engineering, prototyping and production build designs near simultaneously."

An array of advanced army tactical radios, mission command software and the Warfighter Information Network-Tactical (WIN-T) satellite communications suite has been integrated into the vehicles for providing dismounted troops and commanders with mobile networking or mission command on the move capabilities in the battlefield.

Currently, the remaining MRAP prototypes are being integrated and manufactured at the Space and Naval Warfare Systems Command (SPAWAR) in Charleston, South Carolina, and will be shipped to APG for additional testing until the end of September, prior to delivery to troops.

The system is scheduled for deployment with two brigade combat teams from the 10th Mountain Division from October.

Image: The MaxxPro MRAP variant was designed especially for the rugged terrain in Afghanistan. Photo: courtesy of Yarnalgo.