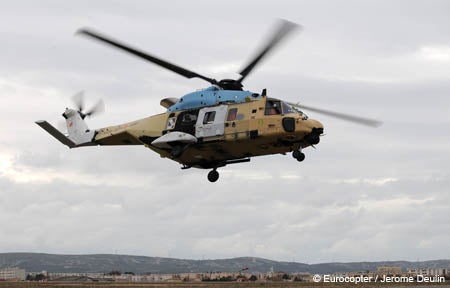 The Spanish Ministry of Defence (MoD) will receive €877.33m of additional funding in the 2013 budget from the government, to finance several long-standing major weapon and equipment programmes, the country’s Deputy Prime Minister Soraya Saenz de Santamaria has revealed.

Santamaria was quoted by defense-aerospace as saying that the extra funding will be used to fulfil obligations incurred by the MoD over the past several years, instead of covering the national deficit.

Specifically, the funding will support 15 major weapons acquisition programmes, including the Eurofighter Typhoon, which will take up €337.5m, while Tiger attack helicopter and Airbus A400M aircraft programmes will receive €88.26m and €46.6m respectively.

Smaller procurement programmes, such as the Spike missile, 155/52 howitzer and the combat supply vessel, Cantabria, will be provided €34.5m, €32.5m and €28m of the funding.

In addition, Navantia will receive €163m for the Juan Carlos I amphibious ship and F-105 Cristóbal Colón frigate, which are currently being built for the Spanish Navy.

"The Spanish cabinet has also approved substantial reductions in some major procurement programmes to help MoD lower its defence spending."

The extra money will not benefit ongoing development programmes, such as the Pizarro tracked vehicle or the S-80 submarine production.

As part of reductions, only 14 of the 27 A400Ms on order will enter operational service with the Spanish Air Force, whereas the remaining 13 are expected to be sold to foreign countries.

Besides approving the reduction in the number of NH90 helicopters on order from 45 to 22, the cabinet also agreed to sell six Tiger combat helicopter and slash Leopard II main battle tanks (MBTs) numbers from 190 to 117.

However, any decision regarding a reduction in Typhoon numbers has been deferred until 2015.

Future of the Spanish Defense Industry - Market Attractiveness, Competitive Landscape and Forecasts to 2023

Future of the Spain Defense Industry - Market Attractiveness, Competitive Landscape and Forecasts to 2022

Future of the Spanish Defense Industry – Market Attractiveness, Competitive Landscape and Forecasts to 2020