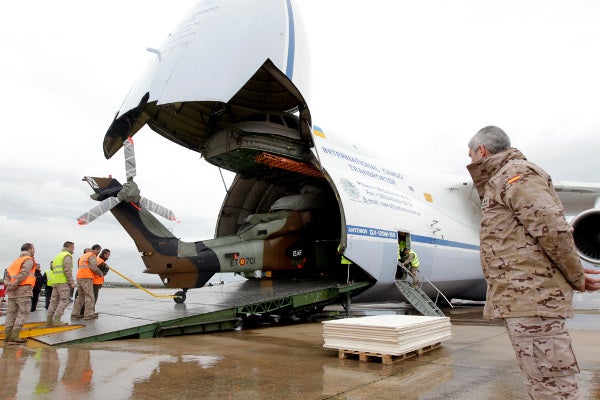 The Spanish Army has deployed three Tiger support and protection helicopters (HAP) to Afghanistan to provide protection and security to its forces during withdrawal from the country.

Scheduled to be operated by the 1st Attack Helicopter Battalion (BHELA), the helicopters were transported by an Antonov AN-124 freighter to Herat, making Spain the third country, after France and Germany, to send the Tiger aircraft to Afghanistan.

Representing the first step in consolidating the helicopter’s place in the Spanish Army, the deployment follows tactical and technical preparation of the helicopters, apart from a comprehensive pre-deployment training by aircrew and maintenance personnel during the past six months at various training ranges across the country.

"The Tigers are scheduled to operate with the Cougar and Chinook transport helicopters already deployed in Afghanistan."

Two Tiger deployments are being planned by the army, each featuring 32 military, including pilots, mechanics and general staff personnel, and lasting for four months.

Around eight officers, 15 non-commissioned officers (NCOs) and nine troops will participate in the first deployment, while the second will include seven officers, 16 NCOs and nine soldiers.

Equipped with a defensive system comprising radar warning receiver and missile launch warning system, the Tigers are scheduled to operate with the Cougar and Chinook transport helicopters already deployed in Afghanistan.

Eurocopter has so far delivered six Tiger helicopters to Spanish Army out of total 24 ordered by the service in December 2004.

Image: A Spanish Tiger HAP helicopter being loaded onto Antonov AN-124 freighter for flight to Herat, Afghanistan. Photo: courtesy of Ministry of Defence of Spain.