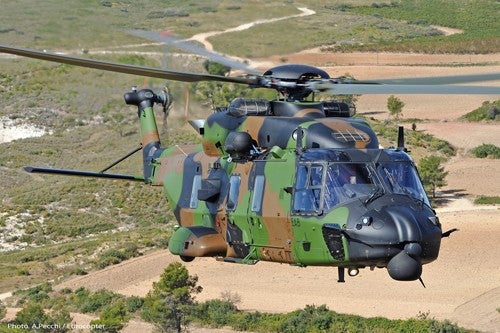 SAGEM has received a contract for production and delivery of a new version of the Module de Préparation de Missions (MPME) mission planning system for use by the French Army Air Arm’s (ALAT) helicopter crews.

Awarded by the French Defence Procurement Agency (DGA), the unspecified contract covers supply of a new variant of the MPME system to help support the service entry of the army’s Tiger support and destruction (HAD) and NH90 Caiman tactical transport helicopters (TTH).

Additional contract responsibilities include provision of life-cycle support services and modernisation of the MPME systems already in service with the army.

The latest MPME system version forms part of the programme contract secured by the company in 2005, covering regiments deploying the Puma, Cougar, Gazelle and Tiger support-protection (HAP) helicopters, as well as the French-German Tiger flying school.

Operated in a network from transportable tactical modules or in a fixed infrastructure, the MPME system enables helicopter crews to cooperatively plan, carry out and debrief missions, and also supports formations comprising different types of helicopters.

Part of the battlefield digitisation (NEB) effort, the system provides crews with mission planning tools modified to the technical and operational requirements of ALAT’s helicopter, and also features greater security and access to new mapping and aeronautical data.

The system specifically multiplies effectiveness during the most critical mission phases, including at night, for deconfliction, avoiding known surface-to-air threats (SAM rings), use of weapons, landing zones among others.

The existing MPME system has been extensively used by ALAT in Afghanistan, onboard the French Navy’s Mistral and Tonnerre amphibious ships during Operation Harmattan in Libya, and most recently during Operation Serval in Mali this year.

Delivery of the first systems is scheduled to take place toward the end of 2014.

Besides MPME system, Sagem has also developed mission planning and restitution system (SLPRM) and the Helipsys mission planning system for use on combat aircraft of the French Air Force and Navy, and for international markets respectively.

The Military Aircraft Market in France to 2025: Market Brief

The Military Aviation Market in France to 2024: Market Brief