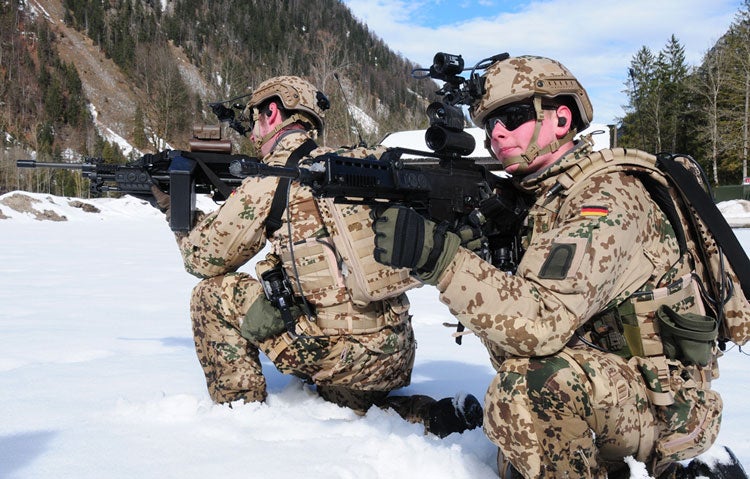 The German Army has taken delivery of the new Infanterist der Zukunft – Erweitertes System (IdZ-ES) under contract from Rheinmetall Defence during an official ceremony in Inzell, Germany.

A total of 30 systems were ordered by the German Federal Agency for Defence Technology and Procurement (BWB) in June 2012 under a €50m contract for 300 troops, each system equipping a ten-man infantry section.

Rheinmetall Defence executive board member Bodo Garbe said the new IdZ-ES is an original, comprehensive and innovative solution, and would enable the German infantrymen to play an active role in network-enabled warfare.

"The availability and flow of information on the battlefield are at least as important as firepower, protection and mobility," Garbe said. "IdZ-ES automatically furnishes each soldier with this information in near real-time."

The systems will be used by Bundeswehr troops for practising prior to embarking on deployment to Afghanistan later this year and in 2014.

Known as Future Soldier system or Gladius, the IdZ-ES system has been designed to enhance overall operational effectiveness of German infantry units, while improving survivability of individual soldiers.

"The availability and flow of information on the battlefield are at least as important as firepower, protection and mobility."

Equipped with a GPS and inertial navigation system (INS) and magnetic compass, the system provides dismounted soldiers with access to all relevant data related to tactical situation and position of friendly forces, as well as mission and system status in the battlefield.

In addition to improving situational awareness, the system provides enhanced protection against biological and chemical agents, as well as extreme climatic conditions.

Rheinmetall is also set to supply additional 60 Gladius systems in two lots of 30 systems each, as part of a €84m follow-up contract received in January 2013.

The first lot is scheduled for delivery in mid-2013, followed by the second in late-2013 providing the next two Bundeswehr contingents with sufficient time to familiarise with the equipment prior to Afghanistan deployment.