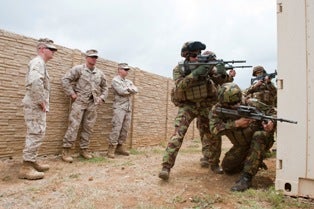 The New Zealand Defence Force (NZDF) is conducting a joint military exercise, code-named Exercise Alam Halfa 2013, with the Australian and US militaries at the Waiouru Military Training Area in central North Island near Waiouru, New Zealand.

A statement released by NZDF said that the exercise involved participation from the New Zealand Army and Air Force, as well as the US Army and Marine Corps, and the Australian Army.

Representing the first of two major field exercises planned for the New Zealand army this year, the drill will validate personnel under varied conditions that realistically replicate conflict scenarios.

The statement did not reveal the number of personnel, light-armoured vehicles, and other platforms articipating in the exercise.

"The drill will validate personnel under varied conditions that realistically replicate conflict scenarios."

In the same exercise in 2012, 1,500 soldiers from New Zealand Army, Navy, and Air Force, and 76 personnel from the US Army and Marine Corps Pacific forces received training in restoring peace and transferring control of a fictional country back to law enforcement and democratic authorities.

Carried out since the late 1990s, Exercise Alam Halfa forms a critical part of the New Zealand Army’s operational cycle by training troops for an array of likely contingencies enabling them to reduce conflict and enhance stability both at the home and abroad.

The drill also aims to exchange tactics and procedures to boost defence capabilities of participating nations in that part of the pacific, in addition to paving the way for a future training relationship.

Exercise Alam Halfa 2013 is scheduled to conclude on 28 May.

The Electronic Warfare Market in Australia to 2024: Market Brief

The Military Satellite Market in Australia to 2024: Market Brief

The Electronic Warfare Market in Australia to 2025: Market Brief