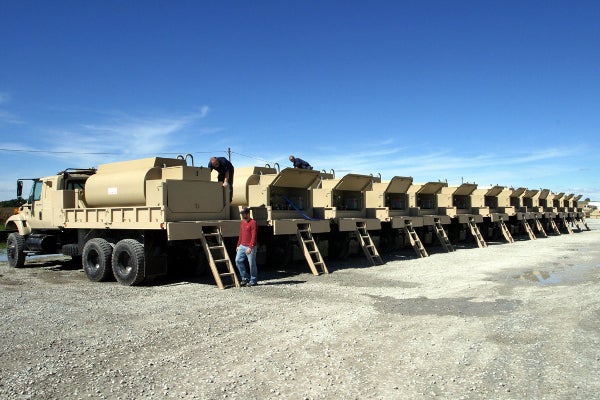 Accomplished through re-use of the MTV’s original components, the cost-efficient upgrade is designed to safeguard ANA and ANP personnel from ballistic and blast threats during operations.

Navistar Defense president Archie Massicotte said the company would continue to support the ANSF’s MTV fleet, and deliver its commitments to the US military and allies on the programme.

"This order reflects Navistar’s strong partnership with the US Department of Defense in providing high-quality vehicles on very aggressive schedules in support of protecting the soldier on the ground," Massicotte added.

"This order reflects Navistar’s strong partnership with the US Department of Defense in providing high-quality vehicles on very aggressive schedules in support of protecting the soldier on the ground."

Additional contract responsibility includes modernisation of additional vehicle elements for enhanced survivability to provide ANSF with the capability to carry out route clearance operations with mine roller applications.

Based on the Navistar International WorkStar platform, the MTV is a high-mobility vehicle currently used in Afghanistan for general troop transport, water tankers, fuel trucks and recovery, as well as petroleum, oil and lubricant (POL) vehicles and cargo trucks.

Around 9,000 MTVs have been delivered by the company to the ANA and ANP since 2004, in addition to another 14,000 vehicles to Canada, Israel, Iraq, Jordan, Taiwan and other militaries worldwide.

Modernisation work is scheduled to be carried out at the company’s facility in West Point, Mississippi, US, with deliveries scheduled to start in April and finish in July.