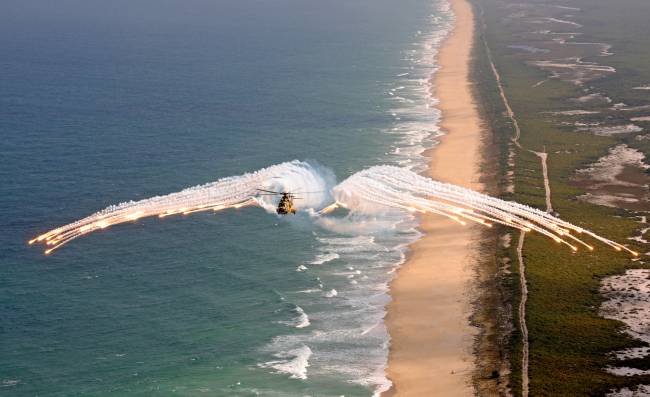 Representing another significant phase in Eurocopter’s contract to supply 50 of these rotorcraft to the Brazilian Armed Forces, the testing successfully validated the system’s operation and integration with the helicopter’s other functions.

Carried out using one of the helicopters produced for the Brazilian military, the airborne trials checked the dispensing of flares and chaff throughout the entire flight envelope of EC725, which was accompanied by Brazilian Navy’s AS332 L1 Super Puma helicopter to ensure safe testing.

Manufactured by Helibras’ Engineering Centre, the self-protection system is designed to detect and identify threats to the aircraft and also confuse heat-seeking and radar-guided missiles.

In-country development of the system forms part of Eurocopter’s technology transfer programme, which aims to enable Brazilian defence organisations and companies to augment their technical capabilities while opening significant growth opportunities for the local industry.

The programme currently includes multiple industrial cooperation projects and offset activities, including facilities, training programmes and all necessary support and innovation involved in the build-up of helicopters on a new Helibras final assembly facility at Itajuba in Minas Gerais.

"16 of each will be handed over to the Brazilian Army, Air Force, and Navy, while the government will receive two aircraft."

Of the total 50 helicopters, which were ordered under a €1.9bn contract in December 2008, 16 of each will be handed over to the Brazilian Army, Air Force, and Navy, while the government will receive two aircraft.

Brazil has taken delivery of the seven of the eight EC725s manufactured under the contract’s first phase in France, with hand over of the last helicopter scheduled before the end of 2013.

Deliveries of the next batch of helicopters, some of which currently undergoing partial build-up on the Helibras Minas Gerais line, will commence in early 2014.

Image: EC725 helicopter dispensing chaff and flares during testing at Santa Cruz Air Base in Brazil. Photo: copyright of Eurocopter.