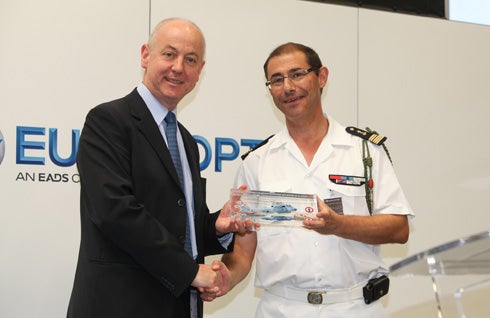 Eurocopter has delivered two variants of the twin-engined NH90 multi-role military helicopters to the French defence procurement agency (DGA) at its facility in Marignane, France.

The helicopters include a second NH90 Tactical Transport Helicopter (TTH) for the French Army and a seventh NH90 NATO Frigate Helicopter (NFH) for the Navy.

Built by NH Industries, the NH90 TTH is an advanced helicopter designed primarily to perform logistics and utility transport, combat search and rescue (RESCO), as well as heliborne operations.

The helicopters can also be quickly configured to carry out casualty and medical evacuation (MEDEVAC), electronic warfare, special operations and counter-terrorism missions, as well as airborne command post and VIP transport objectives.

"The NH90 TTH is an advanced helicopter designed primarily to perform logistics and utility transport, combat search and rescue, as well as heliborne operations."

In its final operational configuration (FOC) qualified version, the helicopter features a sophisticated avionics system to support day and night missions, full military communications system functionality for interoperability in foreign missions, as well as a complete set of technical publications and approval for overseas deployments by ship from its operating base.

The French Army has ordered an initial batch of 34 NH90 TTH helicopters, with an additional 34 on option in December 2008, to help replace its existing fleet of ageing SA 330 Puma transport helicopters.

The French Navy’s NFH will be incorporated into the initial ship-based group of the Aquitaine multi-mission frigate by 2013.

Both the helicopter variants are also operated by the armed forces of Australia, Germany, Greece, Italy and New Zealand.