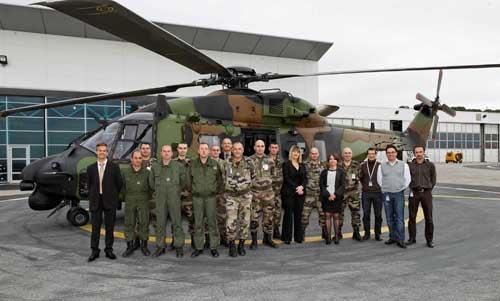 The delivery follows an undisclosed contract awarded by the French defence procurement agency (DGA) in December 2008 for an initial batch of 34 NH90 TTH helicopters, with a further 34 optional, to help replace the army’s ageing fleet of SA 330 Puma transport helicopters.

The new helicopter will join the initial two NH90s received in January and July 2012 at Le Cannet des Maures Army base in south-eastern France, and will be used by the French Army’s aviation unit (ALAT) for intensive flight crew training.

"The next-generation helicopter can be used to perform casualty and medical evacuation, electronic warfare, special operations and counter-terrorism missions."

NH Industries is a joint venture between AgustaWestland, Eurocopter and Stork Fokker; it is the prime contractor for the twin-engine multirole helicopter programme, and is also manufacturing a second variant, the Nato frigate helicopter (NFH), for naval forces.

In addition, the helicopters have been ordered by NH90 members, including Australia, Belgium, Greece, Norway, Oman, Sweden, Spain Finland and Italy.

A total of 27 NH90 NFH aircraft were ordered by the French Navy to replace its Lynx and Super Frelon helicopters to better perform anti-submarine and anti-surface warfare missions.