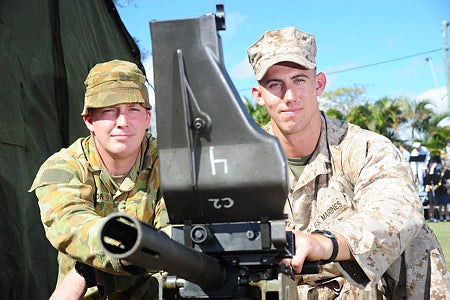 The Australian Defence Force (ADF) is conducting a biennial training exercise, code-named Exercise Talisman Saber 2013, with the US military off the north-east coast of Australia.

Involving 21,000 US 7th fleet and 7,000 Australian Deployable Joint Force Headquarters personnel as a designated combined task force, the exercise is scheduled to be carried out primarily in Shoalwater Bay Training Area, and also in central and south-east Queensland, the Northern Territory and the Coral, Timor and Arafura seas.

Australian Talisman Saber 2013 spokesman Brigadier Bob Brown said the exercise would include mobilisation of both military forces to respond to a fictional scenario, which will be a peace enforcement mission, that will lay out the conditions for the task force to hand over to a UN peacekeeping force.

”The exercise will be the third block of training for the 2nd Battalion, the Royal Australian Regiment’s amphibious ready element landing force.

”As with the previous Talisman Saber exercises, this activity is a major undertaking, reflecting the Australian and US alliance and the strength of the military-to-military relationship.”

"This activity is a major undertaking, reflecting the Australian and US alliance."

Other participating Australian Government agencies in the exercise include the Department of Foreign Affairs and Trade, Australian Agency for International Development (AusAid), Australian Federal Police, as well as the Australian Civil-Military Centre.

Jointly sponsored by the ADF Joint Operations Command and the US Pacific Command, Exercise Talisman Saber aims to strengthen interoperability and also enhance both Australia and US’s combat readiness against contingencies and the war on terrorism.

Talisman Saber 2013 is scheduled to conclude on 6 August.

Image: A US Marine briefs an Australian soldier on a 40mm grenade launcher during the Exercise Talisman Saber Open Day at the Rockhampton Showgrounds in Queensland. Photo: copyright of the Australian Department of Defence.