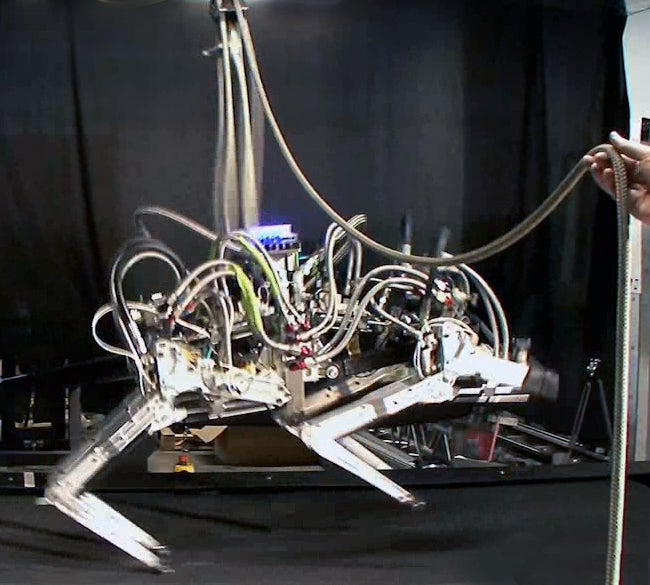 The Cheetah, a four legged robot developed by Boston Dynamics with funding support from the US Defense Advanced Research Projects Agency (DARPA), has set a new robot speed record by reaching 18mph (29kph) on a treadmill at a laboratory in Massachusetts, US.

Developed as part of DARPA's Maximum Mobility and Manipulation (M3) programme, the Cheetah prototype exceeded the previous record of 13.1mph, set by a two legged robot in 1989 at Massachusetts Institute of Technology (MIT).

Boston Dynamics chief robotics scientist and Cheetah effort technical lead Alfred Rizzi said while 18mph is a good start, the company aims to get the Cheetah running much faster and outdoors.

The robot has military applications in terms of serving as a scout robot for a unit and also has interesting applications for civilian search and rescue and emergency response.

The Cheetah robot resembles its feline namesake, with four legs, a flexible spine, an articulated head/neck and is capable of making tight turns, zigzag or stop suddenly.

Powered by an off-board hydraulic pump, the current version of the robot runs on a treadmill and uses a boom-like device to keep running in the centre of the treadmill.

Based on Royal Veterinary College expert Alan Wilson's data on fast running animals including horses and dogs, the robot has been designed to be able to lengthen its stride and increase its running speed by flexing and unflexing its spine.

The company plans to start testing a free-running Cheetah that will operate more naturally in the field in late 2012.

DARPA's M3 programme is aimed at achieving theoretical and experimental advances in the science of robotics.