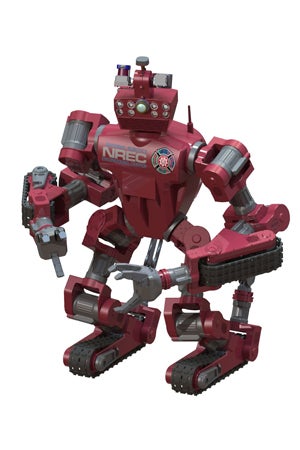 Developed by NREC’s Tartan Rescue Team for DRC Track A, the CMU highly intelligent mobile platform (CHIMP) features rubber tracks on each of its four limbs, to tread like a military tank, offering an advantage while moving over debris and rough terrain.

Capable of moving on two limbs, in case if one or more limbs are required to open a valve or operate power tools, the robot can also carry out complex, physically challenging tasks without any collisions, under the supervision of a remote human operator.

Pre-programmed to grasp a tool using a manipulator present on each limb, step on a ladder rung or turn a steering wheel, CHIMP can also carry out tasks without requiring step-by-step direction from human controller, preventing the lag between command and execution.

"This enables CHIMP to be highly capable without the complexity associated with a fully autonomous robot," Stentz added.

Designed with static stability to enable continuous operation even during a computer problem or power failure, the robot also features near-human strength and dexterity, as well as on-board sensors that create a texture-mapped, 3D model of the environment to help avoid collisions and maintain stability.

The DRC seeks development of robotic platforms that can provide assistance during emergency response to calamities, such as nuclear disasters, while facing obstacles in degraded, human-engineered environments.

Around $2m will be provided to the winner of the final DRC event, which is scheduled to be held in 2014.