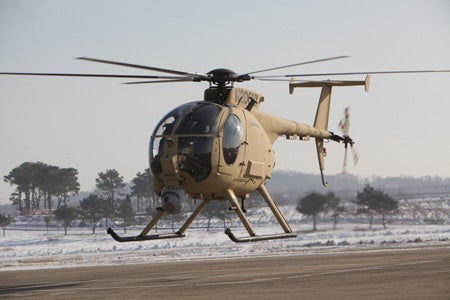 As a modified version of the MD 530F single-turbine helicopter, the ULB was tested to check affordability of integration of unmanned aircraft technology into the ROKA’s MD 500 helicopters to boost operational capabilities of the fleet.

"Boeing and KAL continue to build on a history of collaboration to offer our customers innovative solutions, grow new business, and expand Korea’s aerospace and defence industry capabilities."

Powered by a Rolls-Royce 250-C30 turboshaft engine, the Boeing ULB is an optionally manned or unmanned aircraft designed to support evaluations of a wide range of new manned and unmanned technologies and capabilities for both civilian and military applications.

Having a payload capacity of 1,090kg, the aircraft can be remotely operated or programmed for autonomous operations in dual pilot, single pilot or unmanned flight modes.

The aircraft can be equipped with 2.75in rockets, Viper Strike stand-off precision-guided munitions (SOPGM) and 12.7mm GAU-19 Gatling gun to carry out long-endurance intelligence, surveillance, and reconnaissance (ISR) missions.

More than 500 hours of UAV technology flight testing has been accomplished by ULB demonstrator since its initial test flight in September 2004.

A total of 257 MD 500 helicopters in two variants, including MD-500 Defender and MD-500 TOW Defender, are currently operated by the South Korean Army for light attack missions.